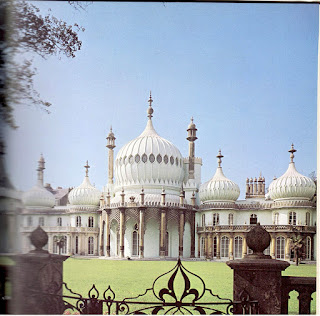 The Royal Pavilion was considered an architectural white elephant and partly responsible for the Regent's huge debts. The Regent's passion for Brighton began in 1783, when he was twenty-one. Suffering swollen glands in his neck, he was told to try sea-bathing. The bracing air of Brighton was considered a wonderful restorative. Prinnie decided he must have a house there and purchased a farm house before employing architects, decorators and furnishers.
The Pavilion was not finished until 1819. An elegant, Classical structure was first completed in 1787, by Henry Holland. Between 1801 and 1803, additions and alterations were made by P.G. Robinson, adding two picturesque oval-shaped wings, together with green shell-like canopies above all the windows, a feature wildly copied by the Regency. His Royal Highness brought back the chinoiserie style, which had been flagging, after being given some Chinese wallpaper. The Chinese style continued with an illuminated passage of painted glass, decorated with flowers, insects, and fruits. 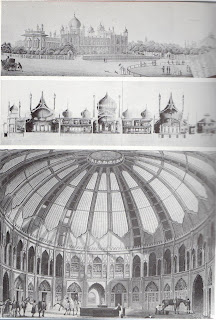 In 1808 the Royal Stables and Riding House were completed sporting an eighty-foot cupola, with accommodation for forty-four horses. The exteriors were of the Moselm Indian style. In 1815 John Nash began his alterations in the Indian style. In 1816 the kitchens were completed entirely steam-heated. In 1820 an underground passage from the house to the Stables was constructed. Gossip suggested it was for the use of secret amorous frolics, which slandered and flattered the fat, ageing George IV who merely wished his guests to pat horses on a wet day. 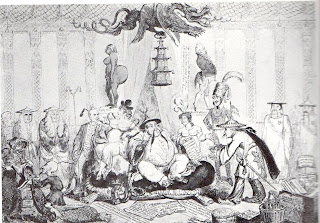 The Pavilion at Brighton has come in for heavy criticism, the most notable of which is Hazlitt in his Travel Notes: "The Pavilion at Brighton is like a collection of stone pumpkins and pepper boxes. It seems as if the genius of architecture had at once the dropsy and the megrims...the King's horses would petition against such irrational a lodging."

Source: J. B. Priestley THE PRINCE OF PLEASURE and his Regency
Posted by Maggi Andersen at 9:59 AM