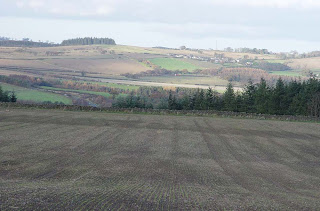 Posted by Jen Black, 6th September 2010
Aiming for something a little different this time, here's an excerpt from a book published over 30 years ago about walking along the Roman Wall. The author recounts various snippets of history, anecdote and good old travel writing as he walks the 70 miles. The location I've chosen is very close to me - about six miles away!
"Corbridge has certainly had its fair share of history. William Wallace burned the town down in 1296. Robert the Bruce did the same in 1312 and so did King David in 1346. It speaks highly for the quality of the Roman roads – straight down Dere Street from Scotland, first stop Corbridge.
Local Northumberland history was equally bloody. Ethelred, King of Northumbria, was slain here in 796. King John came, but on a peaceful mission. He’d heard about the remains of the Roman fort and had been told stories of buried treasure. His dig, in 1201, is about the first recorded archaeological dig in history. He found nothing except ‘stones marked with bronze and iron and lead’ which of course he wasn’t interested in. There was treasure. His spies were right. But amazingly it wasn’t discovered until over seven hundred years later. In 1911, six years after the modern excavation of Corbridge began, a bronze jug was found which contained a hundred and sixty gold coins, the largest hoard of Roman gold coins yet found in Britain. (Today they’re in the British Museum.)
Corstopitum, the Roman fort, is half a mile to the west of the town….lying just under two miles south of the Wall at the point where the Roman roads of Dere Street and Stanegate intersected. Its importance lies in the fact that it became the supply town for the central part of the Wall, with factories supplying goods and materials, shops and taverns where the soldiers could relax and a civil community which grew at its height to around forty acres….Its garrison was the ala Petriana, a Gaulish unit, later one thousand strong, the only cavalry regiment of its size known in Roman Britain at any time."
The author tells the tale of William Hutton, walking the Wall near Planetrees Farm. He was ‘so inflamed at the sight of a workman taking down ninety-five yards of the Wall in front of his very eyes that he is reputed to have burst into tears. He prints the name of the landowner who had order the dastardly deed, Henry Tulip, Esq. The said Henry Tulip had already taken down 224 yards of the Wall before Hutton had arrived, all to build a new farmhouse. Hutton commands the workman to go to his master at once. ‘Request him to desist or he would wound the whole body of Antiquaries. He is putting an end to the most noble monument of Antiquity in the whole island and they would feel every stroke.’’
Thanks to Hutton’s entreaties, twenty yards of the Wall are standing to this day. The whole book is an entertaining read, and I recommend it to anyone who thinks of walking even part of the Wall, or someone who likes reading about history.
Hunter Davies, A Walk Along the Wall, Quartet, 1976
Posted by Jen Black at 6:27 PM

Email ThisBlogThis!Share to TwitterShare to FacebookShare to Pinterest
Labels: A Walk along the Wall, Corbridge, Hunter Davies

Very interesting, Jen.
Thanks for sharing.

I'd love to go there, Jen. Six miles for you, but a bit further for me.