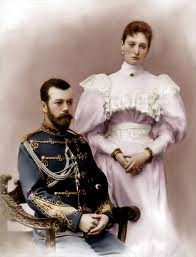 Aside from Peter and Catherine the Great, no other story about the Romanovs is as heartbreaking and poignant as the last Romanov monarchs – Nicholas and Alexandra.

What makes their story so moving? Is it because Nicholas and Alexandra were a love match? They had four beautiful daughters who died a painful death? All that and more.

Alexandra was born 6 June 1868, an "eerie" date for me, personally, because it is 100 years later to the date that I was born. Her mother was Alice of Hesse, and a daughter of Queen Victoria.

Something had happened when Queen Victoria was born. Most scientists believe it was a genetic mutation. She was a carrier for hemophilia.

Hemophilia is a bleeding dysfunction. The person's blood lacks a certain enzyme that allows it to clot. Basically, without treatment a person with hemophilia bleeds to death. Females are generally carriers and males generally suffer from it. And it all boils down to X and Y.

As a young girl, Alexandra dealt with a lot of tragedy. Her mother died. Her hemophilic brother died. She did her best to get through the sadness. Her religion, Protestantism, helped her though. Then, as a teenager, she met "Nicky."

Nicky was Nicholas Romanov, the eldest son of Russian Czar, Alexander III. Nicky was a nice, pleasant, young man who charmed Alexandra down to her toes. At their first meeting in 1884, Nicky gave her a brooch as a keepsake. The gesture won her impressionable heart.

Nicky was a nice guy, but he wasn't leadership material, not like his father, Alexander III, who ruled the Russian nation with an iron hand. Alexander III knew NIcky wasn't up to the task of being a monarch. He gave him a basic education and sent him on a world tour. (Alexander's fault is that he should have paid more attention to his son's education.) He even arranged for Nicky to have a beautiful mistress in the hopes it would take his mind off of Alexandra.

Nicky enjoyed the fling, but his heart was set on Alexandra. Now adults and in love, Nicky wanted to wanted to marry Alexandra. The hold up? Religion.

Nicky was Orthodox and Alexandra liked her religion. She did not want to convert and the wife of the future Czar had to be the same religion as him.

Nicky gave Alexandra time to think on it. After mulling it over, Alexandra agreed to change her religion. 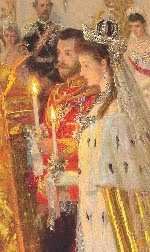 His death was unexpected. It was decided Nicky and Alexandra would marry shortly after Nicky took the throne after his father's death. The bride wore black.

(I don't really know if she did, but there's a good chance she did because the royal court was still in morning for Alexander III.)

Nicholas II was a weak and ineffective monarch. On his coronation, peasants trampled themselves to death. He lost the Russo-Japanese war and had to submit to a Duma – an insult for a supreme autocrat. He had four healthy daughters, none who could take the throne due to Russia having adopted Salic law. His only son and heir, born in 1905, Alexi, suffered from hemophilia. He'd never be healthy enough to take the throne.

Then there was Rasputin. A gifted, yet debaucherous monk whose reputation stained the Imperial family's – yet Rasputin was the only one who could stop the bleeding and heal Alexi when he had a bout of hemophilia. 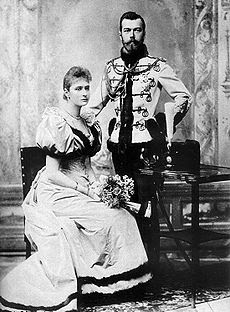 Rasputin's killers were Romanov. Nicky was forced to abdicate and within a year, his family was assassinated by Bolsheviks in July 1918.

To end, the nice, but weak Nicky died loving Alexandra and she, loving him.
Posted by Stephanie Burkhart at 10:54 PM

Email ThisBlogThis!Share to TwitterShare to FacebookShare to Pinterest
Labels: The Romanovs

What a sad story. Russian history is completely off my radar. I enjoyed the information and the beautiful pics. Much thanks and well done!

Thanks, Dani. Ever since my senior year in high school, I've been completely fascinatd with Russian History. I took a semester called "Russian History," and Alexi's sad story really touched a sad note in me.

Nicely told, Steph. It is an intriguing part of Russian history. Followed by the mystery surrounding their daughter, Anastasia who many believed survived. Several women came forward claiming to be her but the most convincing was proved wrong by DNA after her death. The graves have since been found.
Thank you, I enjoyed it.

Hi, Steph. I know little of Russian history (although I have a nephew obsessed with the Romanovs) but it seems that across the board nice men just don't make good kings.

Maggi, indeed, DNA has proved every Anastasia imposter wrong. Interestingly enough, the bones were found around 1990-1991. Both Russian and USA experts were used to identify them. Two sets of bones were missing. One was Alexi. The other...

The Russians felt confident that they Anastasia's remains. The Americans felt confident they had found Marie's remains and that Anastasia's were missing. The girls were so close in age and close in DNA, that there was a controvrosy (sp) of who was who. When the Russian buried the remains in a state occasion, they buried Anastasia, not Marie. Interestingly enough, the Soviets/Russians were never aware that there had been Anastasia imposters in the West.

What happened to the two missing remains?

Near the 1990's, they were found a shallow grave not far from the original remains, scared with acid. There was enough DNA to identify them - Alexi and the missing girl and they have now been appropriately buried.

This post broadens my knowledge about the Russian monarchs. I've always been interested in the story of the Romanovs.

A fascinating film about the last Tsar and his family is 1971's Nicholas and Alexandra. It's almost like a Greek tragedy in scope; Nicholas was an ineffective ruler, an 18th century autocrat wanna be, lost in a 20th century world. The revolution was inevitable, but there were a number of chances to flee the country that were missed.