Having just finished reading this excellent book I thought I’d blog about it as it has so much to offer both to writers researching the eighteenth century, and to readers. This is the biography of a complex and fascinating woman and Foreman excels at the task. 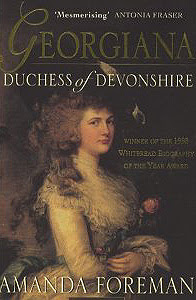 Lady Georgiana Spencer was the icon of her age, adored by the public and largely ignored by her husband. William Cavendish the 5th Duke of Devonshire insisted that his mistress, Elizabeth Foster, known as Bess, come to live with them in what became a ménage á trois. She first came to his attention as the best friend of his wife. Surprisingly, the women’s friendship continued, despite Bess being exceedingly manipulative and jealous of Georgiana, disliked by her mother, Lady Spencer, and later by her children. Nevertheless, Bess had two children of her own with the Duke and lived with the Devonshires for almost twenty years, in a complex and ever-changing relationship, one in which Georgiana suffers exile and ignominy, and more than one rapprochement.

Foreman brings Georgiana to life by revealing her flaws as well as her many attributes, her main one being an addiction to gambling. Extremely fashionable at the time, her passion for the card table led her into enormous debt, the equivalent of several millions today. And since she was having trouble providing the required heir while Bess seemed to have no trouble at all in producing sons, her insecurities deepened, which only exacerbated the problem. I did get irritated with her at times, as she tangled herself in a web of lies and false promises, borrowing from her friends, but then using the money at the gaming table to try to win her losses back. But somehow Foreman kept winning me round to her side again.

She was a beautiful, talented woman and leader of fashion. She wrote poetry and plays, albeit published privately under a pseudonym. She was fascinated by mineralogy, regularly attended science lectures at the Royal Society and gathered together an impressive collection of her own. Most importantly, she was an influential political figure who became fully involved on the campaign trail at election time, and her supper parties were legendary. At a time when women didn’t even have the vote she was skilled at manipulating political decisions and the course of major events through her many friendships with Fox, Grenville, Melbourne, Sheridan and of course the Prince of Wales, who was caught up in the Regency crisis, as he waited impatiently for his father, the mad George III, to die.

As an aside, in this meticulously researched book Foreman also makes a good case for how much power eighteenth century women actually had, unlike that of their Victorian daughters who followed and were far more confined to domestic duties. I can heartily recommend this book as a beautifully written and most readable account of a doyen of her age, a mistress of PR, a devoted mother, but a self-perceived failure in the marriage stakes. I, for one, started by thinking she was an exceedingly silly woman and by the end my opinion of her changed to one of complete admiration, despite her flaws.

Freda, Thank you for reminding me of this delicious book.
I agree,Georgiana was ahead of her time...and don't we need women like this constantly? Keeps us sharp.

You've made this book sound very appealing, Freda. It's on my tbr list.