When I first looked at the cover of my novel The Lady's Slipper, my first thought was that it was lovely, but then my second thought was -
where did they get that dress?
The jacket shows someone dressed in eighteenth century costume - a photograph of a model holding a flower. Because I used to be a costume designer and I know from experience that costumes are recycled, and move from one production or one film to another, I thought it might be fun to find out where the dress had been before it graced the cover of my book. Maybe it was on the stage at the Royal Shakespeare Company, or maybe from a BBC drama. Maybe it had been worn by a great actress or a star, or maybe by someone in their first ever role. (Now wouldn't that be appropriate for a debut writer) So far I have managed to find the photographer and trace the hire company, and will keep you posted when I find out if anyone famous has worn it. Meanwhile you might be interested to know that the BBC do recycle their costumes frequently.

When I worked there one of my first menial jobs was to write the brown labels that go in every costume, pinned to the actual garment by a small gold safety pin. After every programme had been filmed the clothes were laundered, (thank goodness) and then came to be labelled up before going into stock.The label told you the name of the actor that had worn the garment, and the title of the programme and the date. If it had been worn by a major name, particularly recently,then you tried not to bring that costume out for any other well-known actor. When I first started, my job was to clothe the extras, so that meant sifting through all the costumes looking for ones that were big enough. (Mostly the leads are slim and trim, and the extras for some unknown reason much bigger and wider!) Usually costumes for lead chracters are designed and made from scratch and the poor old extras get the cast-offs. Sometimes these are held together at the back with pins if you only see them from the front. Often if an extra is only seen from the waist up, as is often the case on TV, they will be in ordinary clothes from the waist down!

Another of my early tasks was to "break down" costumes to look old using a cheese grater and a dark treacly gunk called "Tetraseal" which was supposed to stop cars rusting, but which we used to use to muddy hems, grease collars, and generally give an appearance of age. 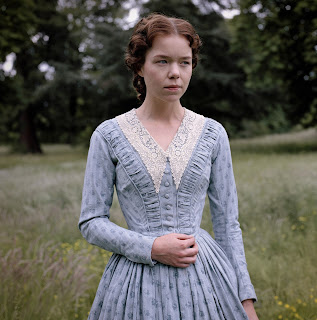 There are viewers who devote themselves to spotting recycling errors, where the same dress is worn by different chraracters in different dramas, so if you want to see a few examples click here at period films 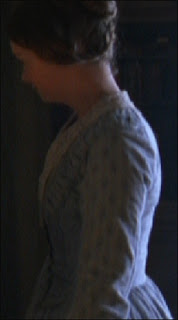 Here is a typical example...
Above you can see Anna Maxwell Martin playing Esther Summerson in Bleak House 2005
And on the right you can see the same frock worn by Ruth Wilson as Jane Eyre in 2006.
You might be interested to know that - according to the people who designed my covers - the American market prefers a more "active" design, the British more static for historical fiction. Do you agree? Has anyone else got an interesting story about the costume on a cover design, or those of you designing your own book jackets, how did you go about it?
Posted by Deborah Swift at 7:39 AM

The cover of your book is even more gorgeous when you are holding it in your hands than it looks in the pictures.

The job you had at the BBC sounds interesting. I would love to see some of those beautiful costumes close up (as long as they had been washed first!).

Fascinating blog, Deborah, I enjoyed the period dress site too.

You have a gorgeous cover, Deb!
i never knew that they shared costumes how interesting. Thanks for the link too!

Thanks for the lovely comments about the cover everyone.There was an article in our paper The Guardian just a couple of days ago about how now it is the author that is judged by the cover - that we all need to dress up and be aware of our media image!Help!

I loved this post. As for my own covers, they do a search for pictures but that is about all I know. I think it is fascinating that you've worked with costuming for movies and such. My only experience has been in the theater and when you can't sew (like me) it can be difficult. We have to watch the recycling as well. I've seen the same dress, show after show. Maybe others don't really notice. What I did learn from my costuming experience is that velcro is amazing.

I am absolutely in love with your covers. Both US and UK!

Oh thanks Maggie, I am too. And Amy, yes I think velcro was sent by the gods for all theatre workes everywhere. But only for the stage - I prefer good old fashioned zips & buttons on my own clothes, velcro's far too scratchy!

Your cover is beautiful. I love the dress. I just wish covers gave us the picture of the whole person, instead of cutting her head off.

When I got hold of your book I was so pleased with how it really 'popped' in real life!

I love the cover too, and look forward to reading the book. I confess to being one of those viewers who love to spot a costume, or a set,house,garden, whatever, that has been used before. But rarely does the author have a say over the cover design.

Great cover, Deborah. It and the dress are beautiful.

At RomCon a few weeks ago, I talked with an author whose house used not just the same dress, but also the same couple from the same photo shoot for two of her books. The cover artist did a good job of making it look different though.

I doubt if anyone outside the author, and people who are familiar with that side of the industry, will notice though.