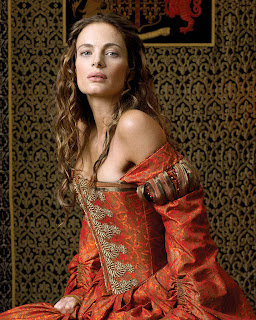 A part of Henry VII always worried that the English Crown might not fall to his male progeny. He is quoted telling his councilors:

"Supposing, which God forbid, that all my male progeny should be come extinct and the kingdom devolve by law to Margaret's heirs, will England be damaged thereby or benefited?"

This was in 1502, as England waited to see if Arthur and Katherine, Prince and Princess of Wales, had conceived. The future for Henry VII's male progeny looked bright. But we all know history had other plans.

What niggled in the back of Henry VII's mind? Was he haunted by the deaths of the Princes in the Tower, rightful heirs to the throne, before their deaths? Did he have anything to do with the Princes' deaths, as the rumor mill implied? Only history knows, but he did feel, STRONGLY, that his daughter's heirs just might inherit his kingdom.

Margaret was born in NOV 1489. She was six when her father proposed a marriage between her and the Scottish king, James IV. This was Henry's way to quell the support the Scottish had for Perkin Warbeck, who was supposedly Richard of York, Edward IV's son. Rumor was Elizabeth Woodville, put a changeling in her son's place before he was taken to the tower.

In 1502, Margaret was married to James IV by proxy. She was 13. It was noted that Henry, Duke of York, 10 years old, threw a tantrum when he realized his sister held higher precedence than he did at court.

In 1503, Margaret joined her husband in Scotland. It was a poor nation, but James was a strong leader and held the warring nobles in check.

James and Margaret were not a love match, but there was strong affection between the couple. Interestingly, Margaret didn't bear children right away. It was speculated she used birth control methods of the time to "time" her children. She was 17 when she first gave birth to a son. Total, Margaret had six children with James IV, but only 1 child, James V, lived to adulthood. All her other children with James died in infancy.

The Scots were natural allies to the French. In 1513, James went to war with England to honor his French alliance and died in the Battle of Flodden. Interesting Historical Note: Katherine of Aragon, now Queen Katherine of England was Regent at the time, and it was her forces that killed James.

Margaret was named regent – as long as she stayed a widow. She gave birth to a son in 1514, after her husband's death.

She managed the regency well, but her heart got the better of her. Her first marriage was for state reasons, her second was for love – she married Archibald Douglas, Earl of Angus, a Scottish Lord.

The Scottish lords didn't like that and sent for John Stewart, Duke of Albany to be regent from France. Without support, Margaret was force to flee to England. Her daughter, Margaret Douglas was born in England. (She lived to adulthood and was the Countess of Lennox – Henry Stewart, Lord Darnley's mother – remember him? Mary of Scot's husband)

Archibald stayed in Scotland while Margaret was in England. (Everyone thought he'd stay in England with his wife and baby daughter.) He had to hold his property so the crown couldn't get it. The separation ruined the marriage and Margaret sought a divorce. In 1527, the pope gave it to her.

Her brother, Henry VIII, was appalled. Ironic, considering what he dared to do just a couple of years later – get a divorce himself. And we all know what the Pope told him.

Margaret played Scottish politics and intrigue. Her son, James, was crowned at 12 and she remained an advisor, but their relationship always had a bit of a strain to it due to their separation when he was younger.

Margaret married a 3rd time to Henry Stewart, another Scottish lord. She married for love, but time quickly proved her a 3rd time loser. Henry was a big flake like Archibald. Through the help of her daughter-in-law, Mary Guise, Margaret reconciled with Henry, her husband. She died of a stroke in 1541.

While Elizabeth served well as Henry VIII's heir, it was Margaret's great-grandson who united England and Scotland, and in her way, it was Margaret's heirs who better served England, as her father supposed they would.
Posted by Stephanie Burkhart at 11:35 PM

Woah. That was cool. It was informative without being boring. Brava! ^_^

I actually used to thing Mary, Queen of Scots was the same person as Margaret Tudor... Oopsie.

Great post, Steph. I once had a raging debate going with several graduate school friends on who killed the boy princes, i.e. Henry Tudor or Richard III. Both had motivate and means, but Richard had the most to gain, at least immediately.

I don't remember how we ended the discussion now but it was great fun.

I LOVED reading this. It was very interesting.

I recently read a non-fiction book about Margaret and after hearing about her life am surprised that there's not more written about her.

I loved reading this about, Margaret, Well done Stephanie, she was such a fascinating character and one sadly neglected in history.
For instance she did not even have a walk-on part in the Tudors.

re: Richard the Third - well I am a Ricardian and my latest novel(Dangerous Enchantment) dares to speculate on what really happened to Richard Duke of York! I also consider another theory in the first book I had published in l978 A Sprig of Broom
Oh I hope the above is not considered a shameless plug, sorry, just wanted to come out in the debate.

TURA - I strive for that in my posts - to be informative, but not boring. History was never boring, why make so now? Yeah, they were - Mary Queen of Scots was Margaret's granddaughter.

KEENA - it's a very interesting debate and I have to say I lean toward Henry VII having something to do it. Of course he had no immediate gain (he wasn't Richard's heir or heir presumaptive (sp?) but if he did have intentions of confronting Richard and winning his crown in battle, then he would need the princes out of his way for a smooth accession. Since records & recordkeeping was as good as it now, we can only speculate. For me, it would make sense that Elizabeth Woodville would want to save the one son she could and substitute a challenging. BUT, there's no history proves she did one way or the other. The same for who killed the princes. I can honestly say, Henry VII's mother, Maragret, had designs of her son being king - how far she pushed him and how far she went herself, history can't say.

BARRI - Nice to see you pop in. Glad you enjoyed it.

DAPHNE - I'm surprised there isn't more on her, either. She lead a fascinating life.

MARGARET - Your novel sounds very interesting. It was a dangerous time in England as they left the middle ages and entered the renanannce (sp?) I do think Richard III received a bad "rap" as history is written by the victors and Henry VII was the victor here. Of course, he's going to paint Richard III in a bad light. Richard was very loyal to his brother, Edward IV. He was named Edward V's protector because Edward IV trusted him. I can't imagine the political intrigue that forced him or made him feel like he had to kill his nephews. Again, history will never tell.

Thanks for popping in all.
Smiles
Steph

I've been reading much about these subjects lately. English history fascinates me.
Thanks for these new (to me) tidbits!

Wow--I can never keep all the history straight. Very informative!

You might enjoy an exceprt I have just posted from my book, Tudor: The Family Story. It is taken from a chapter on Margaret Tudor, Queen of Scots. Enjoy!
http://www.leandadelisle.com/blog/