Let's hear it for Anne 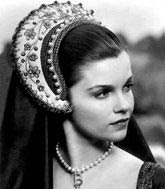 In reading Tudor novels in the last year or two I've found it possible to pick up the idea that Anne Boleyn was considered less than aristocratic. Not that any author states such words in plain black and white; it is more the way in which authors describe her, have her contemporaries regard her, and select quotes that strengthen certain characteristics.

Yet she was born in Norfolk, most likely at Blickling Hall fifteen miles north of Norwich. Experts argue over a birth date of 1501 or 1507. Personally I go with 1507 because if she was in her mid to late twenties when Henry “noticed” her, there must have been a very good reason why she was not already married. And at such an advanced age, with no children as proof of fertility, she would not have been considered good breeding stock. Her father, Thomas, was eldest son to Sir William Boleyn of Blickling, and her mother, Elizabeth, was the daughter of Thomas Howard, Earl of Surrey and later Duke of Norfolk. 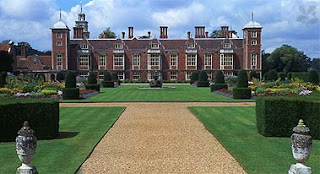 Seven of Anne’s great grandparents included a duke, an earl, the granddaughter of an earl, the daughter of one baron, the daughter of another and an esquire and his wife. She was better born than Henry’s three other English wives.
The only grandparent not of the nobility was Geoffrey Boleyn. He left Norfolk in the 1420s, made money as a London mercer and built Hever as a comfortable, moated manor house. He became lord mayor in 1457-8 and secured the daughter of Lord Hoo as his second wife. The oldest son of that marriage, William, was a leading Norfolk gentleman, knighted in 1483 and a JP who married the co-heiress of the wealthy Anglo-Irish Earl of Ormond.
While William was alive, he caused problems for his son, Thomas, Anne’s father. Though he would eventually inherit great wealth – the Boleyn and Hoo estates, half the Ormond fortune and half the lands of the wealthy Hankford family inherited from his Butler grandmother – Thomas had to live at Hever on £50 a year plus whatever his wife brought him, which wouldn’t be much, since her father had only just bought back the Howard lands he lost when he supported Richard III at Bosworth.

Thomas was not exactly penniless, but didn’t have enough money to do or live as he wished, so he entered service to the king. He attended Arthur’s marriage to Katherine of Aragon and escorted Margaret Tudor to Scotland for her marriage to King James, and by Henry VII’s death in 1509 had risen to the important rank of squire of the body. His father William died in 1505 and the old earl of Ormond was in his eighties, so Thomas had high expectations of wealth coming his way very soon. The Tudor court was at the sharp end of politics, where the important decisions were made, and his star was rising.

In 1513 his daughter Anne went to the Hapsburg court at Mechelen in Brabant where she impressed with her cheerful demeanour and intelligence in spite of her young age. Today it is a town of some size between Antwerp and Brussels, but in Anne’s day it was a haven of aristocratic and princely behaviour where she served as maid of honour to Margaret of Austria. She would stay abroad for nine years, soon became bi-lingual and spent time in France as companion and lady in waiting at the French court. When she came home, of course she stood out among the provincial girls from the shires.
You'll find picturesof actresses who've played Anne Boleyn here and my favourite drawing of a lady who may have been Ann, here
Posted by Jen Black at 8:53 AM

This was a fascinating post - I don't think many people know much about Anne's background, despite the fact she is one of the most popular figures in historical fiction. great pictures too.

Thanks. I find her fascinating myself - she must have had nerves of steel.
Jen

Oh, I loved Genienve Beaujold (sp?) as Anne Boleyn in Anne of a 1000 Days. She's probably my most favorite Anne Boleyn, but I did enjoy Natalie Dormer in The Tudors. She is definately a wonderfully complex character in history!

Thanks for sharing
Smiles
Steph