I am a compulsive buyer of books, both new and second hand and one day was browsing along my shelves when I spotted one I’d bought years ago in Hay-on-Wye. It was called Queen of Hearts, written back in the 60s by Charlotte Haldane. It proved to be an autobiography of Marguerite de Valois and as I began to read I was immediately intrigued. Margot, as she was familiarly known, was no average woman, rather one born before her time, and I wanted to know more about her. So I began on a journey of twelve months research and discovery which led me to write a stirring tale of her adventures, her intrigues and passions, and the dangers she faced in the sixteenth century French Court. 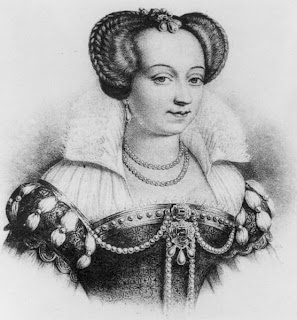 Margot was the youngest of the three daughters of Henry II and Catherine de Medici. When our story begins in 1565, Catherine was a widow, her eldest son Francis II also dead. In addition, none of her three surviving sons enjoyed good health, so while in theory the crown of France was safe, there was no certainty that any of the Valois brothers would survive into old age, and these were risky times.

Margot had long been in love with Henri de Guise, but as with all royal princesses, was expected to bring political benefit through marriage. Various unlikely suitors were considered and rejected.

Here is the Duke of Guise, can you blame her for loving him? 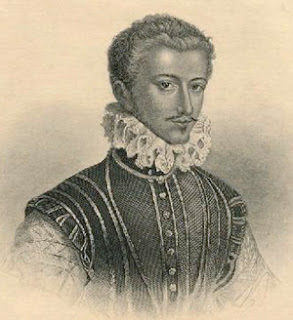 In the end the Queen Mother, who had never showed much affection for this rebellious daughter, decided Margot should marry Henry of Navarre, a Huguenot, in order to bring to an end years of religious wars.

Margot wasn’t exactly thrilled by the prospect. Navarre was a third cousin whom she’d known from an early age, and she considered him something of a country bumpkin with garlic-tainted breath and grubby feet from climbing mountains barefoot.

There was also some resistance from his own mother, Jeanne d'Albret, but after she died, in somewhat suspicious circumstances, the wedding went ahead.


Navarre was a likeable enough fellow but not the faithful sort. Once Margot realised this, she thought what was sauce for goose… She embarked upon a string of love affairs, not least with Guise, a dangerous undertaking, and intrigue and scandal surrounded her at every turn. Both her brothers, first the half mad Charles IX, and then the bi-sexual Henri Trois with his mignons, pet dogs and monkeys, made furious attempts to control her, though with very little success. Henri frequently accused his sister of licentious behaviour, despite being far more guilty of that charge himself. He behaved like a rejected lover, jealous of the least attention she paid to any other man. He was even jealous of her love for their younger brother, Alençon, accusing the pair of plotting against him. He kept her a virtual prisoner in the Louvre for four years, and throughout that time Margot lived in fear of her life while recklessly flouting convention as far as she dare. Somehow she had to save her husband's life, help him to escape, and then follow him to safety. A task fraught with danger…
Posted by Freda Lightfoot at 6:06 PM

Great post! I only know of Margot from what I have read about her mother, but I'd love to read more about her specifically.

This must be the Margot of the film La Reine Margot - which was showing in the Uk a couple of nights ago. Lovely costumes, visually perfect, but I gave up because I couldn't sort out the characters. Reading the subtitles didn't allow time to match info to the visuals so I was completely at sea.
Jen

I'd love to see that movie. I'll have to check and see if US will be showing it anytime soon.

Enjoyed this post--will have to check out the novel. Is there a recent biography of Margot?

I"m as compulsive book buyer as well! I'm looking forward to reading The Hostage Queen at some point. I recently bought another book about Marguerite - In the Shadow of Queen by Regine Cornell. Have you read it?

The movie is - loosely - based on Alexandre Dumas' La Reine Margot (maybe that's why I wasn't confused). If there's an English translation, check it out. The book is a typical Dumas romp, though with tragic moments, too.

Thanks for your comments everyone. I know of no recent biography about Margot, and it was a wonderful story to write. The paperback comes out later in the year. The sequel, The Reluctant Queen comes out in November. More about this later.

Funnily eough I had just watched La Reine Margot, and remember her story from Evergreen Gallant by Jean Plaidy. This was more about Henry of Navarre but of course covered Margot too.
I loved your blog because I find these children of Catherine Medici, fascinating. Wasn't it one of them that went a courting Queen Elizabeth?

Yes, that was Alencon, the youngest. I've seen a clip of the film on Youtube which doesn't look too accurate, but then it's a complex tale. Dumas dealt with only a small part of the story, and in his swash-buckling way, of course. I tried to make my story as accurate as possible, but had to make many decisions which of the propaganda about her was true or false. Never easy for a writer as some of the best bits are often only rumour.