I have to admit I do have a passion for historical dramas and the BBC do it better than anyone!

Three that I thought I would mention here because I enjoyed them so much are:
First is Lark Rise To Candleford (There is currently 3 series). 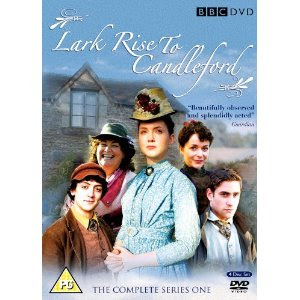 Blurb
Flora Thompson's charming love letter to a vanished corner of rural England is brought to life in this warm-hearted adaptation. Set in the Oxfordshire countryside in the 1880s, this rich, funny and emotive BBC series follows the relationship of two contrasting communities: Lark Rise, the small hamlet gently holding on to the past, and Candleford, the small market town bustling into the future.
Seen through the eyes of young Laura (Olivia Hallinan) the inhabitants endure many upheavals and struggles as the change inexorably comes; their stories by turns poignant, spirited and uplifting. And Laura herself must face great change. Taking a job in the Post Office in Candleford, run by the mercurial Dorcas Lane (Julia Sawalha - Cranford), Laura turns her back on her childhood hamlet to make her way in the world. With her loyalties divided, she must choose her own path to womanhood...
Dawn French, Julia Sawalha and Liz Smith star alongside Olivia Hallinan in this ten-part adaptation of Flora Thompson's magical memoir of her Oxfordshire childhood.
The second is, Cranford. 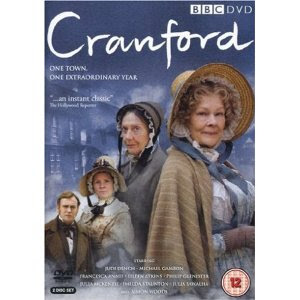 This is the DVD of the lavish BBC costume drama, Cranford, based on three of Elizabeth Gaskell's novels including Cranford itself.
The cast boasts some of Britain's best-loved and most experienced actresses, including Dame Judi Dench, Dame Eileen Atkins, Imelda Staunton and Francesca Annis.
The five-part drama series tells the witty and poignant story of the small absurdities and major tragedies in the lives of the people of Cranford, as they are besieged by forces that they can't withstand.
Cranford in the 1840s is a small northern English town on the cusp of change. Things are on the move. The railway is pushing its way relentlessly towards the town from Manchester, bringing fears of migrant workers and the breakdown of law and order.
The arrival of handsome new doctor, Frank Harrison (Simon Woods) from London causes a stir; not only because of his revolutionary medical methods, but also because of the effect he has on many of the ladies' hearts in the town.
Judi Dench plays Miss Matty Jenkyns, whose hopes and rebellious spirit are crushed when she was forced as a young woman to give up Mr Holbrook (Michael Gambon), the man she loved.
Philip Glenister, Lesley Manville, Julia McKenzie, Julia Sawalha and Greg Wise also star alongside Judi Dench and the above-mentioned actors. Created by Sue Birtwistle and Susie Conklin for BBC One and written by Heidi Thomas (I Capture The Castle, Madam Bovary, Lilies).
The third is Lilies. 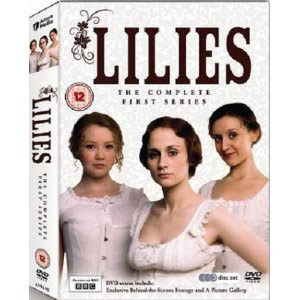 Set in the aftermath of the first World War, Lillies is a quality period drama that centres on the activities of the Moss family. It’s also, seemingly, a show that’s been brought to an end after just one compelling series.
Living in 1920s Liverpool, the Moss family consists of three girls--Iris, May and Ruby--and one boy, Billy. Trying to keep them in order is their father, following the death of their mother. The three girls, at the behest of their mother, are Catholics, and it’s they that Lillies concentrates the best of its time upon.
Other historical dramas recently bought and enjoyed:
Middlemarch
Miss Austen Regrets
Wives and Daughters
These dvds now join the exhaulted ranks of my favourites period dramas such as North And South (Elizabeth Gaskill), Pride & Prejudice, Becoming Jane, Sense & Sensibilty, Bleak House, North & South (USA civil war), Miss Potter, Rob Roy, Braveheart, The Patriot, Little Women and all the others that are on my shelves.
Posted by AnneMarie Brear at 2:29 PM

I'm so disgusted with the offerings on TV, I started purchasing BBC historical dramas a few months back. My DVD stock includes most of your suggestions, with one exception. I didn't know about "Lilies." Thanks for the heads up!
~Jo~

Hi Anne! I loved the 'I Claudius' drama series, too.

Yes, Lilies is a new name to me too, and I watch almost every BBC historical drama I can manage to access! Myf ave is still Jennifer Ehele and CF in Pride and Prejudice!
Jen

This is a great post!I love the BBC costume dramas too, but then again I'm biased as I used to work at the BBC in the Costume Design department. I'm going to post later this week about life as a costume designer and how it relates to writing a historical novel. I love Cranford, and I loved Becoming Jane.

Loved Lilies, I hope they bring it back soon. Most BBC shows are beautifully produced. The one about the pre-Raphelite painters was fabulous.

I really do need to watch Cranford one day. I enjoyed the book when I read it back in the last century.

My favourite without a doubt is North and South with Richard Armitage.

Deborah, how amazing you worked in the BBC costume department! Yes, please post about it.