Over the years, many people have asked me how I came to be so interested in the case of Jack the Ripper, probably the most teasing unsolved series of murders in the history of recorded crime. I'd researched and studied the murders for over 35 years before finally deciding to write the first of my ripper trilogy, A Study in Red - The Secret Journal of Jack the Ripper. Those studies had led me to becoming a member of numerous 'Ripper' related societies and forums, one of which was the prestigious Whitechapel Society 1888, a London-based worldwide organisation set up to investigate and study not just the ripper crimes, but also life in the East End of London during the Victorian and Edwardian eras. It was the secretary of that society who one day approached me and asked if I'd write an article for their quarterly journal, detailing the 'genesis' of A Study in Red. He thought the members might appreciate learning how I came to write such a novel, after so many years of interest in the case. With that in mind, I set to work on the following article which was first published in the Society's Journal in the summer of 2008.
So, who was Jack the Ripper? Well, if such a prestigious investigator as Inspector Frederick Abberline, whose headstone is shown above, was unable to solve the riddle, what chance would I or any modern-day ripperologist stand? Hope you enjoy the following piece.

The following article was first published in The Journal of The Whitechapel Society 1888, Issue #20, June 2008
“Whodunnit?”… “I dunno.”
Brian L Porter, Author of the Award Winning ‘A Study in Red – The Secret Journal of Jack the Ripper’
(Winner, The Preditors & Editors, ‘Best Author, 2009 Award’, The Preditors & Editors Best Thriller Novel 0f 2008 Award, a CK2S Kwips & Kritiques ‘Recommended Read’ and winner of The Authors Lounge Best Cover Art Design Award, May 2008.)

I think the year was nineteen-seventy one, or thereabouts. I was a young man serving in the Royal Air Force, stationed atop the Cotswolds at a now long-closed base known as RAF Little Rissington. The camp was a couple of miles from the picturesque , but seemed to my young mind to be light years from the rest of civilisation. Why, I used to ask myself, was the address of the camp given as when in fact that city lay over 50 miles away? Off duty life could be, and invariably was rather boring for a teenage airman at that remote, and as I though it desolate spot.
It was during the particularly cold winter of that year that I discovered the treasury that was the camp library. With little to do outside of my duties, and nowhere to go as I didn’t yet have a driving licence or the financial means to obtain a car, I began to immerse myself in a quest for knowledge. History had always been a particular favourite of mine at school, and so it was only logical that I began to choose and read books with a historical angle to them. It was here, in the midst of a Cotswold winter, that I first came ‘face to face’ with the story of Jack the Ripper.
To this day I can’t remember the title of the book that first brought the Whitechapel murders to my attention. I recall it being a heavy volume of ‘Great and Unsolved Crimes of the Past’ or something of that ilk. Whatever the title, one piece in that book caught my attention, and in truth has held it ever since. I recall it as being less than three pages long, that piece about Jack the Riper, but something in the words on those pages raised an awareness in me that hadn’t existed before that day. I’d previously heard of Jack of course, but I suppose my young mind had until then lumped him together with such fictional monsters as Count Dracula and Frankenstein’s monster. Now, here he was, revealed in black and white as being as real as I was, a predator who had managed to remain hidden and unidentified for almost a century.
I began to read as much as I could on the subject of the murders, even joining a mail order book club in order to try and find more information on my new pet obsession. I devoured everything I could read, and tried to watch any television programme or movie that depicted the Whitechapel Murders, whether in a factual or fictional scenario.
It soon became clear to me that no-one had the faintest idea who Jack the Ripper really was. There was a huge list of suspects, and a case could, an indeed was made out for many of them as being ‘prime suspects’ in the case. With such a welter of names to pick from it seemed to me that it would be easy to pick a name and then try to build a case to fit the facts surrounding that suspect, as I’m sure has been the case in many so-called renderings of the case.  I had no idea who the Ripper was, and if truth be told, I would still hesitate to reveal the name of my own chief suspect as, like many before me, I have only the words of others, and a few scraps of factual evidence on which to base my assumption of guilt. Over the years, many ‘new’ suspects have been put forward as candidates for the role of Jack. I doubt we’ll ever know who he was, but it will continue to be fun trying to solve the great unsolvable mystery of the Autumn of Terror.
So my own quest for knowledge went on, and the years went by, and I continued to read and watch, and absorb all the minutiae that would occasionally find its way into the media, revealing yet more so-called facts and ‘incredible discoveries’ about the most infamous serial killer of them all. I devoured the works of Begg, Fido, Skinner and so many others in my search for information.
When my own son was born and grew to be a young man of around ten, he realised that his father was interested in the Jack the Ripper case. As he grew older, he encouraged me to write a book on the subject. “I can’t,” I’d always reply. “I don’t know who did it.”

“Neither does anyone else Dad,” would be his reply, and of course he was right, though it wasn’t until three years ago that his years of cajoling finally began to bear fruit. I’d written a poem some years before that had been published in a small anthology. I’d given it the title of ‘A Study in Red’ and it had been an attempt to present the killings from the aspect of the Ripper’s mind, as though the poem were a confession of sorts. When, three years ago I showed the poem to a friend who happened to be a writer and publisher, he said that if he ever wrote a dark psychological thriller, he’d love to use it as his introduction. He never got the chance!
From that day, the idea of writing a novel based on the poem grew in my mind until the novel that is ‘A Study in Red’ began to take shape. Once more, I delved into the past, using my own books, and the wonderful forums of Stephen P Ryder’s Casebook to research and refresh my own memories and thoughts on the case. I didn’t want to write a ‘factual’ book. I don’t consider myself to be enough of an authority on the subject to do such a thing, which after all has been handled so well and so expertly by many far better qualified than I over the years.
No, I decided it would be a novel, and one that looked at the case from a rather different angle than most previous Ripper novels. In fact ‘A Study in Red’ in some ways could be said not to be about Jack the Ripper at all. It is in fact the story of one man’s descent into mental instability as a result of reading the so-called journal of the Ripper. What makes it terrifying, (I hope) is the underlying thought that is transmitted to the reader, that Robert Cavendish is somehow connected to the Ripper both by birth and historical events. The fictional journal I created is the tool by which we see how a so-called sane and ordinary man (Cavendish is a psychiatrist) can be pulled to the edge of the precipice, that thin dividing line between madness and sanity, simply by being exposed to the words of an evil and brutal mind. I was able to throw forward certain ideas and theories as to the motives behind the ripper murders in my fictional scenario, without having to worry too much about them being ridiculed by the so-called ‘experts’ This is after all, a work of fiction, and as such, I allowed myself a little licence here and there to indulge my own particular theories as to who and what inspired Jack to take to the streets, and as to why he was never caught or identified. I hope those who read it will forgive me my transgressions.
In the end, the greatest difficulty I faced in creating the novel was that my own prime suspect simply wouldn’t fit the profile I’d drawn up for the fictional Jack the Ripper of the book. So, being a fictional account, I was able to use another suspect, one who I don’t personally believe to have been the Ripper, but who certainly would fit the profile. Do you see what I meant earlier about using a few facts to enable a suspect to be drawn into the frame for the murders? Here was a prime example of that. I wove a web of fact and fiction together in order to create what I hope will be accepted as an entertaining piece of Ripper fiction. A Study in Red was never intended to throw new light on the case, or to identify Jack the Ripper to a waiting world. So far, those who’ve read it have, for the most part, been highly complimentary of my fiction.
I hope it continues to entertain and perhaps terrify a few readers as time goes by. But, as to the burning question, “Whodunnit?”
I have to say, quite simply, “I dunno.” (Though I do believe Bruce Paley* had a point).
Bruce Paley, author of Jack the Ripper, The Simple Truth. 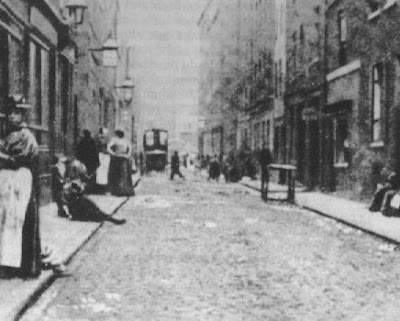 Tilly the Rescue Dog
I'm a rescued terrier, a Bedlington/Glen of Imaal crossbreed, and the star of the 'Harry Porter's Dog Tales' series of books. The books tell the true stories of me and my fellow rescue dogs who live with author Harry Porter and are designed to help raise awareness of the plight of abused and neglected dogs around the world. The books are written in our own words and I'm also the narrator of Harry's forthcoming dog training manual too. I'm a very lucky little lady, and I hope you enjoy visiting my blog as often as you can, if of course, you have some time to spare.

Plenty of theories abound, Brian, and it still fascinates us. Great post.