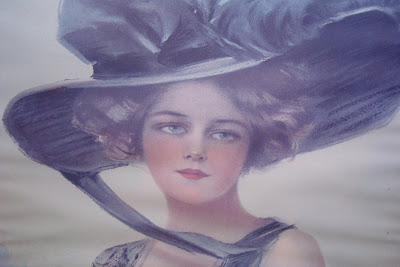 Last week, my husband and I visited an antique store in Athens, Tennessee and we came upon this beautiful painting of a Victorian Woman In A Hat. We decided that we had to have it because she is the exact image of my husband's late grandmother, who simply adored hats and had a large collection of them. I thought I would share the painting with you.

While researching my second novel, Call Me Duchess, I came upon Victoriana Magazine in the internet and it proved quite helpful. In Call Me Duchess, Marquerite Wiggins' cousin, Samantha, is getting married and her parents, Lord and Lady Hardwood, are hosting an engagement party for her. Below are some interesting facts regarding the proper etiquette for Victorian engagements from the Victoriana Magazine:

"When young persons have decided to marry, a proper gentleman will take the first opportunity to acquaint the girl's father with their hopes, and, making a frank statement of his affairs and prospects, formally ask his consent to their marriage. If consent is refused, patience and good conduct will usually win over even the most obstinate parent.

Traditionally there are no formal announcements of a betrothal but it is customary, however, for the father of the bride to give a dinner and announce the wedding engagement. The guests at a dinner given to announce a wedding engagement are relatives or very intimate friends of the engaged couple. At the end of the repast the father rises, lifts his glass of wine and drinks to the health of his son, mentioning the name of the young man his daughter is to marry. Each guest bows to the son, at the same time lifting a wine glass. The engagement ring is presented when the wedding engagement is announced — or at least it is then openly worn, its choice depending upon the taste and means of the giver. The engaged man is congratulated, but one wishes the girl all happiness. After the ladies have left the dining room the gentlemen devote a short time to general congratulations and cigars.

To announce the wedding engagement the young couple should write personal notes to their respective relatives and near friends, mailing the notes so that all may be received at the same time. These acquaintances will then pass on the pleasant news to the world at large. The notes often mention one or more afternoons when the young woman will be at home to receive her friends informally with her mother. The groom's friends also take this opportunity of making her acquaintance.
At news of a betrothal, friends hasten to extend invitations for various festivities to the happy pair such as receptions, dinners or theater parties. It is the custom for the relatives and intimate friends of a bride-elect to give her a gift when she announces her wedding engagement. At one time it was the fashion for intimate friends to send to the fiancé engagement presents in the shape of teacups. A cup of tea was popularly supposed to be one of the consolations of spinsterhood. A teacup would therefore be an invidious gift until after the wedding engagement, when its significance would cease to apply.


As for the engagement ring, it is in best taste when it contains only a solitaire stone -- either a diamond or a colored stone such as a ruby, emerald or sapphire, which may range in price from two hundred and fifty to two thousand dollars. Colored stones and diamonds, set diagonally are also worn; but not a pearl, as, according to the German idea, "pearls are tears for a bride." The initials of each of the contracting parties and the date of the wedding engagement are usually engraved in the engagement ring. The ring should be worn upon the same finger as the wedding ring, the third finger of the left hand, where subsequently the wedding ring serves it as a guard. The matter of presentation is a secret between the engaged pair."

Gorgeous hat! Lovely painting too, what a find, Maggie. I'm amazed to think people spent thousand dollars on a diamond ring in the 19th C.

I adore this photograph - and goodness aren't we glad our beaus don't have to go through all that nowadays...or do we???

Call Me Duchess is sure to be another winner!

Thank you, Maggi and Margaret. I'm glad that you liked the portrait.

What a lovely painting. It offers inspiration for a Victorian age writer. I love how you presented the customs of engagement. Well done.

I just "The Young Victoria" and enjoyed it very much. Makes me wonder just how Albert and Victoria "contracted" their marriage with these rules in mind.

Thanks for your nice comments. I'm so happy to meet you!