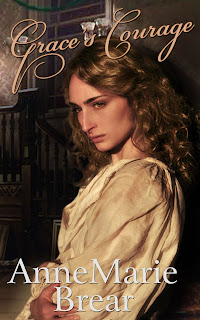 I truly enjoyed writing Grace's Courage. It's many engaging characters and the twists and turns this novel took as it evolved, had me gripped from page one.
I wrote the first draft in five months because most chapters just flowed really well, which is very rewarding for the writer when that happens! But then, who couldn't have fun with seven daughters, a tyrannical father, a
selfish mother, a lost love, a handsome butler and a quiet, enigmatic coal miner?
I hope readers enjoy it too.

Blurb
As the Victorian Age draws to a close, lonely and brokenhearted, Grace Woodruff fights for her sisters’ rights to happiness while sacrificing any chance for her own.
The eldest of seven daughters, Grace is the core of strength around which the unhappy members of the Woodruff family revolve. As her disenchanted mother withdraws to her rooms, Grace must act as a buffer between her violent, ambitious father and the sisters who depend upon her.
Rejected by her first love and facing a spinster’s future, she struggles to hold the broken family together through her father’s infidelity, one sister’s alcoholism, and another’s out-of-wedlock pregnancy by an unsuitable match.
Caring for an illegitimate half-brother affords Grace an escape, though short-lived. Forced home by illness and burdened with dwindling finances, Grace faces fresh anguish –and murder– when her first love returns to wreck havoc in her life.
All is not lost, however. In the midst of tragedy, the fires of her heart are rekindled by another. Will the possibility of true love lead Grace to relinquish her responsibilities in the house of women and embrace her own right to happiness?

*Please note that Grace's Courage was originally published with the title, The House of Women.

Review Rating: 5 Cups
Grace Elizabeth Woodruff is one of seven daughters who witness her family crumble before her.
Montgomery Woodruff, the father of the household, does not love his wife and hates being saddled with seven daughters.
Diana, the mother, neglects the household duties leaving everything to Grace.
William Ross holds a part of Grace's heart. It has been six years since she has seen him.
William Doyle, the new butler admires Grace.
George Henry Walters is shift foreman and a union man who fights for the rights in the mines. He is smitten with Grace.
Grace wishes for joy and pleasure just once in her life. She has always been the strength of the family and now the pressures are rising into one giant boiling pot about to explode. Her father pawns his daughters into marriages that tighten his money belt. The daughters see it as escape from an abusive, selfish father. Grace tries to keep peace while taking care of ailing sisters and wishing for her own flight. When an old love returns, a new butler is hired and a shift foreman enters her life, Grace wonders is this her chance to leave a family that has needed her many years.
Grace's Courage is a saga about a family full of betrayal, hate, lies, infidelity, disappointments and often love. Grace is a strong character that strives to keep things intact while facing many frustrations. Her deep felt emotions interweave within the pages. Ms. Brear paints a remarkable novel with well-developed secondary characters that bring out the good and the bad in the worse of families. She instills believability with all her characters. She pens a story that will touch the heart, often irritate and sometimes make the reader cheer. This is a most rare gripping read.
Cherokee
Reviewer for Coffee Time Romance
Reviewer for Karen Find Out About New Books

After finishing Grace's Courage by newer author Anne Brear I applaud this author for this immensely satisfying and fine example of a riveting Victorian historical. I can promise that once started you will not put it down until the final page is turned.
In Leeds, England 1870, Grace Woodruff, eldest of seven daughters is mired in responsibility. Grace runs the household and serves as a buttress between her sisters and the father who sees all his daughters as nothing but worthless commodities to be wed in order to forge business ties, gain wealth and ingratiate himself with the nobility. But fate is about to deal the entire Woodruff family some devastating blows and losses that will send this dysfunctional family spiraling out of control leaving Grace to stand alone in forging a new way of life in trying to manage both household and her heart.
What an amazing story from this newer author that chronicles a strong and resilient young woman's journey as she put aside her own broken heart in order to battle and stem the tide of the downward disintegration of her family from the result of their father's perfidious ways. Grace was a terrifically strong and resilient  heroine whose loving heart and loyalty to her siblings was unwavering and constant in a life turned upside down. Coming on the heels of the authors fabulous debut of KITTY MCKENZIE this sticks to a common theme of featuring a well to do family that must learn how to live in reduced circumstances while surmounting real
problems that people face even today. Brear excels with a deft hand in creating superb depictions of her characters with amazing depth. Frankly, if you've ever been a fan of Catherine Cookson, you are going to love AnneMarie Brear. This was a remarkable, deeply moving and powerful read I hated to see end and one in which I highly recommend.
Marilyn Rondeau, RIO - Reviewers International Organization

Nobody wants to help Grace Woodruff deal with the running of the household or managing the problems of her mother and many sisters. It would, by all rights, be enough to drive anyone crazy, but Grace rises to each and every challenge that comes her way. Placed in a time period where women had very little power, Grace proves again and again what strong women are capable of achieving.
AnneMarie Brear has created a truly remarkable heroine, along with a cast of characters that will keep you guessing until the end.
"Grace's Courage" is full of twists and turns that are sure to entertain. Ms. Brear's character development has certainly impressed me. Kudos to the author. -
Diane Wylie - author

AnneMarie Brear has penned a wonderful historical novel addressing hurtful family issues as well as triumphs. Grace's Courage is set in 1870 Leeds, England, in a time when women had few choices.
Despite the abuse of her father, the emotional abandonment of her mother, and the unpredictability of her six sisters, stalwart Grace Woodruff keeps the family together through thick and thin. But all she really wants is her own family.
Grace's Courage is a story of serious family issues, of love lost and love gained, of financial strife and crossing class lines.
Ms. Brear brings amazing strength of character to Grace as well as depth of emotion to all characters--characters you're sad to leave at the end. I would recommend The House of Women to anyone.
- Jacquie Rogers author.
Posted by AnneMarie Brear at 6:07 PM