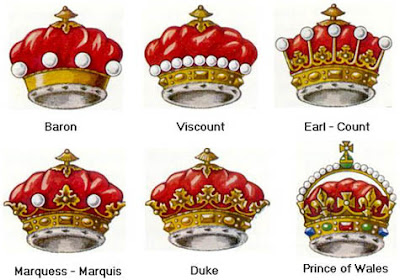 Coronets and Nobel Hierarchy:
From Admirals to Generals, politicians to Royal bastards, a peerage has been the highest honour bestowed by a grateful Crown for almost 750 years. Over 2,560 hereditary peerages have been created by the Crown since the mid-13th century, of which 828 still survive. Additionally, 1,130 life peerages have been created in the last one hundred and thirty years, of which 595 are currently sitting in the House of Lords.
But what, precisely, does ennoblement entail?

Email ThisBlogThis!Share to TwitterShare to FacebookShare to Pinterest
Labels: Peerage

Emery Lee
Combining meticulously researched historical settings and love of a great romantic tale, Emery Lee fictionally explores the Georgian era in a distinctly period voice. In THE HIGHEST STAKES, a tale of thwarted love and horseracing, Ms. Lee transports the reader to a world where racing and breeding were the obsession of the uppermost elite, and a match race might easily replace a duel in settling a point of honor. Upon this high stakes turf of England and Colonial Virginia, a tale of drama, danger, thwarted love, and retribution unfurls… Second in her Georgian era trilogy, Emery Lee spins a web of drama, passion, and deceit, deep in the world of high stakes gaming, when a chance meeting at the hazard table between a seasoned gamester and a courtier of a prince, changes their destinies as unpredictably as a roll of the dice.