As I'm working on another Regency romance, I decided to do a series of blogs about this fascinating era.
. 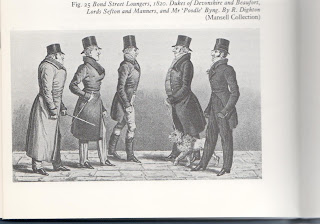 The Dandies
During the Regency, ape leader, Beau Brummel created a new simple and expensive style of dress. Absorbed with appearance, Brummel took  five hours every morning at his toilet, bathing in eau-de-Cologne and water, then an hour at his hairdresser and two hours 'creasing down'  his starched cravat until satisfied with the folds. He might discard a dozen or more cravats which he described as 'our failures' in the process. His obsession with fashion made the reputations of tailors, hatters, glovers and shirtmakers who gave him extensive credit in return form his custom.


The Storekeepers in and around St James's Street
Weston, Brummel's tailor in Old Bond Street and the shopkeepers in the area of St James's Street  benefited from him and the dandies that aped him. As did Hoby, the most famous of all the bootmakers, on the corner of Piccadilly and St James's Street who died worth 120,000 pounds. He made military long boots, fashionable Hessian boots with a tassel dangling from the V-shaped front, Hussar boots to be worn with pantaloons, top boots worn with buckskins or breeches. Wellington boots and 'highlows' or ankle boots, worn with trousers. 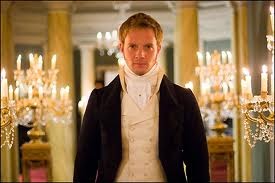 Lock's the hatters at No. 6  made hats to measure of the finest quality from beaver hats worn by the nobility and the gentry in the country to the glossy black top hats worn by the dandies in town and the chapeau bras which a gentleman carried folded up under his arm in the evening. Hussars and the Dragoons had to pay more for their beplumed and gold-laced shakos; but the dandies often got away without paying their bills from one year to the next.
The Berry Brothers at No. 3 St James's Street, the world-famous wine merchants were founded by the Widow Bourne in 1699. During the Regency they were grocers renown for the varieties of tea, they stocked, Congue, Pekoe, Souchong, Bohea and many others, coffee and tobacco from the New World and spices from the Far East. Their weighing machine used for huge bags of coffee began to be used to weigh customers. Brummell weighed himself regularly with and without boots, and before he got too obese, the Prince Regent used it to.
Friboug & Treyer's were famous snuff merchants with a thriving business at No. 34 the Haymarket, just off Piccadilly.  Lord Petersham, famous for his Cossack trousers and double-breasted coat named after him, was  an expert in the art of moistening, mixing and blending snuff. When he died, his 'snuff-cellar' was valued at 3,000 pounds. He left 365 snuff boxes, one for every day in the year.
Gunther's, the pastry-cook in Berkeley Square was the most celebrated confectioner in London could charge what he liked. He made all sorts of Biskets and Cakes, Fine and Common Sugar Plums and all sorts of Ices. Ice from the Greenland Sea was buried in the ground under the cellars of Berkeley Square to supply their cream and fruit Ices. Lord Alvanley once ordered a hamper from Gunther's which cost him 200 pounds.
John Hatchard began Hatchard's Bookshop in Piccadilly with 5 pounds and a few second-hand books in 1797. Fortnum & Mason was founded by George III's ex-footman Charles Fortnum and the grocer, John Mason in 1817. Both Hatchard's and Fortnum & Mason have been rebuilt on their original sites.
Society was dominated by the Dandies selfish pursuit of leisure and pleasure (The Pleasure Principal ) 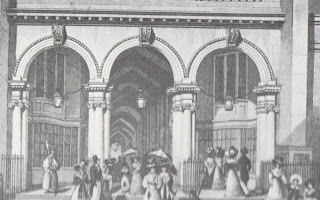 Gambling
Gambling at the Clubs in St James's Street - White's, Boodles and Brooks's, made many seek King in Clarges Street to mortgage their estates or pledge their inherited gold and silver plate or their wives' diamonds at Hamlet, the jeweler in Cranbourn Alley or Rundell and Bridge at Ludgate Hillge who not only sold jewelry but trinkets of all kinds from seals to snuff boxes.
While gambling at their clubs, a curious kind of self-discipline was adopted, for it was considered ill-bred for anyone to show his feelings when losing heavily, or to rejoice if fortune turned in his favor. 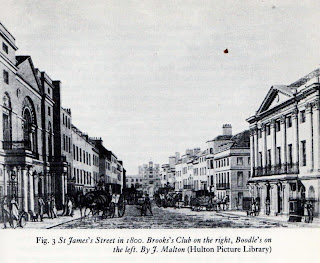 A Man's World
The clubs, the shops and the smart hotels were all dedicated to serving the fashion-conscious dandies and the wealthy aristocracy. No lady valuing her reputation would walk down Bond Street or St James's in the afternoon. In the morning, she would be accompanied by her maid, a footman or a page to protect her from being ogled by any dandies that found her attractive, although most would still be abed.
In Georgette Heyer's The Grand Sophy, Sophy  Stanton Lacy outraged Miss Wraxton by driving her down the exclusive male precinct of St. James's Street. 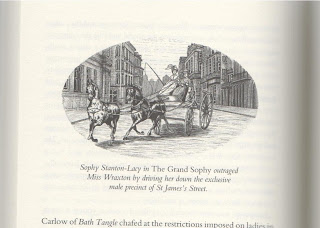 Posted by Maggi Andersen at 1:37 PM

Thank you for this wonderfully documented article. Useful and full of insights.