Everyone loves a Wedding

With everyone in England getting a day off for the Royal Wedding, weddings are very much in people's thoughts and minds.

In the seventeenth century there were several interesting customs that our Royal pair might like to take up once they are married.

Ball -money
The first is that it is usual for the gentry to bestow charitable largesse on the poor, and for the bride to give out "ball-money" to her former female companions to help them buy finery and so find a husband.

In 1604 Dudley Carlton writes about a court wedding and says:

"there was none of our accustomed forms omitted; of bride cakes, sops-in-wine, giving of gloves, laces and points.... and at night there was sewing into the sheet, casting of the bride's left hose, and twenty other petty sorceries."

Bride cakes were a tradition where a cake of wheat or barley symbolising fertility would be broken over the heads of the bride and groom.

Lace and points
The Exeter merchant John Hayne laid out £5 13s for ribbons, posies, favours and points at his wedding in 1635. Gloves are given to the ladies and to the bell-ringers. Gloves symbolise the joining of hands, or the hand of friendship when sent to friends who care unable to be at the ceremony.The bride herself usually goes bare-handed.

Public Bedding
In order to make sure the marriage is consummated it is the custom for the wedding party to accompany the couple to bed. The bed is decorated with ribbons and herbs and flowers  for the occasion - rosemary, myrtle (known as the herb of wedlock) and maiden's blush were common choices.

Sops-in-wine
The couple were then fortified for the night by a special posset made of wine and spices. I expect that alcohol might have been essential if most of your neighbours were to witness the act!

Stocking-throwing
When everyone crowds into the bedchamber there's a game played where the bride's garters are removed and the young men seize upon them to put in their hats as a trophy. Garters are traditionally blue as they are associated with the Virgin Mary.The bride's-maids carry the bride into the chamber and the groom is meanwhile undressed and put into a nightshirt elsewhere, with much rowdiness and lewd jesting. After the groom's-men bring him to the bed, the couple's stockings are handed out and the assembled company tries to throw the garments backwards over their shoulders to hit the couple.

It is customary to wake the couple early next morning with loud music - usually a fiddle and drum, and for the neighbours to enquire whether "it is done" before the pair are allowed to make their sheepish escape.

The Royal Wedding will probably be more traditional than most - I shall watch with interest to see if any of these 17th century customs have been retained! 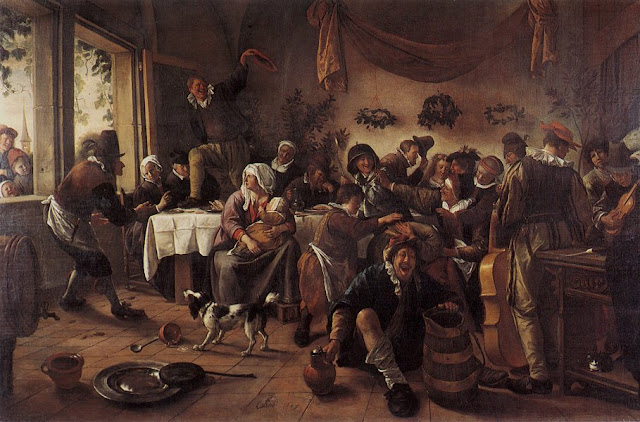 The wedding in this picture by Jan Steen of 1667 looks particularly riotous, the man in the foreground decidedly the worse for ale!

You can find out more about my books at www.deborahswift.blogspot.com/
Posted by Deborah Swift at 2:25 AM

Fascinating post Deborah - I love the idea of a 'chari-vari' where the newlyweds are harassed by a crowd outside their window on their wedding night, shouting and drumming until paid to go away.

I think I prefer throwing the bridal bouquet!