A Profile in Courage - George VI 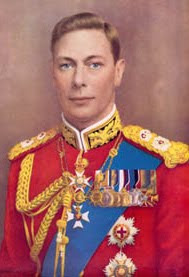 George VI was the right man for his times, but his life had never been easy despite his title. Recently, I saw the movie "The King's Speech." It is a brilliant peek into the personal courage that George VI embodied.

Born on a day full of heartache.

George VI was born on 14 December 1895, a great-grandson to Queen Victoria who was still on the throne. For Victoria, 14 December was the anniversary of her husband's death, Prince Albert. Unsure of how the Queen would take the news, George's parents offered to name their son Albert Fredrick Arthur George. Victoria was pleased. Interestingly, the Queen noted that "Bertie" as George VI was known by his family, was born on such a sad day, but was given a name so dear to her, it was a name that was great and good.

And Bertie would be a good king, despite the challenges he faced.

Bertie was the second son of George, Duke of York (George's father was King Edward VII, Victoria's son). Bertie's parents were not overly demonstrative, leaving their children to be raised by nannies. In "The King's Speech," Bertie tells Lionel of a particular bad nanny who used to pinch his cheeks and withhold food from him.

As a young child, Bertie suffered from ill health. He had to wear painful splints because he was knock-kneed and he developed a stammer. Left handed, young Bertie was forced to use his right.

Bertie saw service in World War I as a midshipman in the Navy. His fellow officers referred to him as Mr. Johnson, in order to hide his identity and protect him. Later, he became involved in the Royal Air Force. After the war, he studied at Cambridge and on 4 June 1920, he was created Duke of York by his father, George V.

Then Bertie met Lady Elizabeth Bowes-Lyons at a children's birthday party. She gave him the glace cherry from her cake. Bertie was determined to win her heart.

While Lady Elizabeth had bloodlines going back to Robert the Bruce, she was considered a commoner by British law. Bertie pursed her wholeheartedly, but he had to buck up when she turned down his first marriage proposal. Displaying that dogged personal courage he had since birth, Bertie did not give up and finally Lady Elizabeth told him yes. They were married on 26 April 1923. In 1926, their daughter, the current Queen Elizabeth II was born. What I find interesting about this historical tidbit, is that Bertie was given a lot of leeway from his royal parents to find a bride. Yes, Lady Elizabeth Bowes-Lyon was a commoner, but she was beloved. Queen Elizabeth II, knowing this about her parents, had still insisted her son, Charles, find a royal bride. (dare I add one that was virginal?) If she had followed her parents' example, I suspect Charles would have been as happy as his grandfather with his marriage the first time around. Now, with Prince William posed to marry Kate Middleton, a commoner, it seems the Queen has taken history to heart.

In 1925, Bertie gave a speech at Wembly in which he couldn't hide his stammer. Knowing the people expected more from the Duke of York, he sought help from an Australian born speech therapist, Lionel Logue. Lionel worked with Bertie to help him master his stutter and by 1927, Bertie spoke with much more confidence in public. Lionel kept working with Bertie through the 30's and 40's. In 1937, now King, George VI awarded Logue with the Royal Victorian Order, which recognized distinguished personal service to one's sovereign.

Bertie loved tennis and was very physically active, but he would need all his stamina when his brother, Edward VIII abdicated the throne in 1936.

Some find Edward VIII's story romantic, some find it appalling, but Bertie's older brother abdicated to marry the love of his life, Wallis Simpson on the eve of World War II.

Bertie came to the throne and styled himself George VI. He was 41. Interestingly, he had to buy Balmoral and Sandringham from his brother since they were private properties and didn't pass to him automatically. 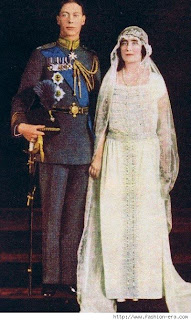 When World War II struck, George VI displayed his personal courage once again for all to see, staying in London during the bombing raids of the Germans. London's east end was hit hard. When two German bombs exploded in a courtyard at Buckingham Palace, George stood by his wife when she declared, "I am glad we have been bombed. Now we can look the east end in the face." The couple's profile gave Britain the morale boost it needed.

Starting in 1949, George's health started to fail. The fact he was a heavy smoker didn't help. In September 1951, his left lung was removed when a malignant tumor was discovered. He died peacefully in his sleep on 6 February 1952.

While born under the shadow of sadness, Bertie and his great-grandfather, Prince Albert, shared the trait of great personal courage. (I consider Prince Albert the ultimate "beta" male – after all, he took a backseat to his wife, Queen Victoria, at a time when men should rule the marriage. This took a lot of confidence in himself and a lot of chutzpah to look his contemporaries in the face.) This courage defined them both, invigorating a nation, and proving they were the right men for their times.


About Stephanie: She enjoys history, especially British history. Some of her favorite monarchs include; Edward IV, George II, Queen Victoria, and George VI. You can find Stephanie on the web at her blog: http://sgcardin.blogspot.com or her website at: http://www.stephanieburkhart.com
Posted by Stephanie Burkhart at 10:27 AM

It is so good to see some focus on a king who was a fundamentally good man! I really like the rogues etc, but this is refreshing!

Interesting post, Steph. I didn't know the Queen Mum was a commoner (of course, it simply means she was the daughter of younger sons at some point). That makes her personality and career as Queen and dowager even more fascinating.

Marg, I really have a lot of respect for George VI. He did not have it easy, but he was a rock for Britian during World War II, much like FDR was for us Americans.

Keena,
Yes, I agree. The Queen Mum led such a fascinating life. I would say she's still an inspiration, even now.

I never knew that Diana was considered royal before she married Charles. Can you elaborate? Thanks.