A little bit about... St. Patrick 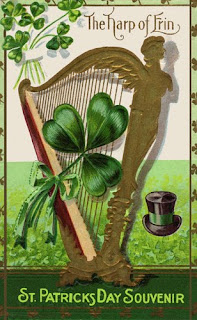 St. Patrick was an interesting guy who helped to bring Christianity to Ireland. It's kind of hard to pin down when he was born, but it's believed he was born between 385-387 AD in Wales. He was born a pagan. When he was 16, Irish raiders kidnapped him and held him as a slave. It's believed he was held on the west coast of Ireland, near Mayo, but the exact location is unknown. While in Ireland he lived as a Shepard. It was lonely work, and Patrick turned to God for comfort. According to Patrick, God spoke to him in a dream telling him to leave Ireland. After 6 years, he escaped to Gaul where he studied and became a Christian.

In 432 AD he was called to go back to Ireland. When he returned, he helped to establish churches and schools. He used a shamrock to help teach the Holy Trinity to the people. The shamrock represented how the Father, Son, and Holy Spirit could all exist as separate elements of the same entity.

There can be no doubt St. Patrick left his mark on the Irish people. In 1903, Ireland made St. Patrick's Day an official public holiday.

Interesting fact: The Chicago River is dyed green in honor of St. Patrick's Day each year.

Interesting note: The shortest St. Patrick's Day parade takes places in Dripsey Cork. It's only a 100 yards (a football field!) between the town's two pubs.

Interesting myth: St. Patrick is known for driving the snakes out of Ireland, but its highly unlikely he did. The island was separated from Europe during the last ice age.

Ewww?
St. Patrick's jawbone was preserved in a silver shrine.

While there's not much Irish in my house, we have a good time being green for the day. My husband enjoys cooking a corned beef. My son, Andrew, gets into wearing shamrock socks and a button that says "Kiss me, I'm Irish." I'm a sucker for Bailey's Irish Cream & Harp.

I'd love to hear about your customs and traditions.

Let me leave you with a couple of Irish sayings:

A diplomat must always think twice before he says nothing.
Posted by Stephanie Burkhart at 6:00 AM