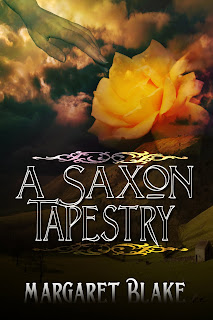 In the Uk a new series has started on television. It's all about the Normans, so I thought it appropriate to post an extract from my new novel. A Saxon Tapestry, as the title suggests, tells the story from the Anglo-Saxon point of view. I am pro-Anglo-Saxon and anti-Norman!

Originally published by Robert Hale Limited as "The Saxon Tapestry" this new version is available in print and e-book and kindle from www.whiskeycreekpress.com or www.amazon.com

A small cage had been constructed, just large enough for the boy to sit in. He could not stand or lay down, but twice a day he was taken out and exercised. Ivo had put a collar about the boy’s neck, and the duty guard would tie a length of rope to the collar and pull the boy about. It always caused a great deal of amusement, but Le Blond somehow could not enjoy the humiliation and left the scene.
Le Blond’s cheeks still bore the scars from the boy’s long nails, and he had ordered his nails to be cut. He didn’t think the guards would have cut the nails gently, but even he was unprepared for the swollen tips of the boy’s fingers as he swung the flaming torch down into the cage and the boy, startled by the sudden furious light, covered his face with his hands.
“I do not understand you,” Le Blond murmured, almost to himself. “You walk to no set pattern. You are either a sniveling coward that no man can respect, or a fool who dares my patience. You change moods as suddenly as a woman at her moon time. I don’t want to treat you like this, but you test me so!”
He poured a measure of wine into a goblet and thrust it through the bars. The swollen fingers seized the goblet, and for a moment he thought the lad was tempted to throw it back in his face, but it was cold and the wine would be warm and whatever else he was, the lad was no fool. He drank greedily, then pushed the goblet back through the bars. Le Blond refilled it with a faint chuckle.
“Come, Alfred, give in, be my companion. God alone knows there is no intelligent company to amuse me.”
“Never. You have no right; you are trespassing on my land.”
Le Blond crouched low on his haunches, peering into the cage at the boy. How thin about the face he had become; gone was that slightly cherubic, innocent roundness, and in its place was an unpleasant wolfish leanness. “I have won by right of battle. I am the victor and this…” He waved a hand. “…is the spoil. Why will you not accept the inevitable? I should put you to the sword, but if you do as I wish, then I will fight to have you pardoned. I swear it.”
“Pardoned from what, pray?”
“For being a Godwineson. You know that the king hates all Harold’s family, yet he lets his sons live. When time has softened his memory, he will pardon you too. I am sure of it. Be sensible, Alfred.”
“You must be uneasy in your ownership, Rolf Le Blond, to let me trouble you so.”
“Perhaps my heart is kind, or maybe looking at you as you look now, my head is soft from too many blows. Think over what I have said. You have until tomorrow to decide. Bend the knee to me; that is all I ask. Promise me you will cause no trouble or do things against us...”
“And if I refuse?”
“There is little point in prolonging your agony. You will be executed at dusk.”
Alfled handed back the goblet. She could feel the wine warming her belly; it stilled her chattering teeth and made her forget her stiff limbs.
“One thing,” she asked. “I am curious, were it my sister left, what fate was to have been hers?”
“She was to be sold into slavery.”
“You would have done that…sold my sister?”
“I cannot say, truly I cannot.”
“It is hardly fair what you ask. You do not offer me the chance to escape?”
“I dare not, boy. It could all fall on my head should you find an army of supporters.”
* * * *
At one time in the night when the temperature was so low she could hardly breathe without pain, when her limbs were so stiff she could not feel them, Alfled felt that death would be a wonderful fate. Le Blond would have her executed swiftly. She knew she would not be tortured to death; perhaps he would hang her, or have a dozen archers shoot their arrows into her body. Maybe he would have her beheaded, but whatever the method, it would be over quickly.
Then as the dawn came, and the hall and its environs came to life, as the cock crowed and the dogs barked, the horses neighed with pleasure and human voices could be heard on the sharp morning air, she knew she would not take a step that might just lead to total blackness.
Part of her believed what the priests had told her, and she could even visualize the great golden gates of Heaven, but so too did she hear her brothers scoffing about it and declaring that there was no such place because if there were, it would be more crowded than Friday night at a London whore shop. No, she was afraid to take the big step voluntarily into the next world. There just might not be a next world, and she was young…so very young.
“The seigneur would have your answer.”
One of the house servants who knew her identity had come to ask the question. He looked at her fearfully; shame for the sorry state she had found herself in caused his cheeks to burn vivid red. There was nothing he could do to protect or save her; he had failed in his duty to the house of Godwine. Alfled read all these things in his face.
“Tell him…tell him…” She began to tremble so violently, speech was impossible.
“For pity’s sake, lady, do as he says,” the man cried.
“Never call me ‘lady,’” she spat. “You fool. I will bow the knee, tell him I will—I swear.”
“Praise be to God,” the servant muttered as he returned to the hall.
Posted by margaret blake at 9:49 PM