The diaries of pioneer women are something which I not only collect but also use for research material in writing my own novels, such as Kitty McKenzie's Land, and other novels I've written - books set in my country, Australia, during the Victorian era.

These brave and resourceful women encountered conditions which would test their resilience and resourcefulness to the utmost: relentless heat, dust and isolation; and no doctors or pioneer women featured who faced the risk of dying from malaria, the scourge of tropical Australia.
Many women lived in wooden huts or tin sheds with concrete floors, cooked on wood-fired stoves, and lacked any of the domestic appliances we take for granted today.

Georgiana Molloy and the Brussell women tamed hectares of virgin bush with primitive implements. Myrtle White was trapped among sand hills, the fine grains invading her home and impeding her harrowing attempts to get her feverish baby son to the doctor before he died.
White's predicament was quoted by the Rev John Flynn while raising funds for his Flying Doctor service.The outback was indeed 'no place for a lady'.

Yet many women with no previous experience of hardship rose to the challenge of creating homes, nursing farming - and keeping journals, which provided a startling vivid picture of the life they faced - part of the outback legend.

The book 'Great Pioneer Women of the Outback' profiles ten female pioneers, from Jeannie Gunn, author of 'We of the Never Never' to equally remarkable but lesser known women, such as Emma Withnell in Western Australia and Evelyn Maunsell in Queensland.

Building on the women's own records and her knowledge of Australian women's history, author Susanna de Vries documents the extraordinary grit and determination it took to build lives that their grandchildren have difficulty in comprehending but some older Australians still remember. 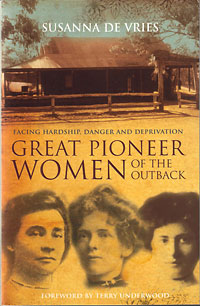 For my own stories I find the strength of pioneer women fascinating. Their stories sometimes seem too outlandish to be true. If you wrote down half of the things they had to endure, readers would think we wrote fantasy. Yet, these women survived such harsh primitive conditions, rearing children, working beside their men and coping with the demands of running not only a home but usually a large station and staff.

For more information about the great books Susanna de vries has written you can visit her website: http://susannadevries.com/home.html
Posted by AnneMarie Brear at 8:48 AM

Interesting Anne. It puts me in mind of the famous Australian writer, Henry Lawson who wrote about pioneer women. The short story called "Water Them Geraniums" is one of a series of Joe Wilson stories that appeared in Joe Wilson and His Mates (1901), which along with Lawson's earlier collection While the Billy Boils (1896), contains the author's best work. The women he so poignantly writes about suffered great hardship and were incredibly brave and strong.