Featured in the local newspaper.

In celebration of Where Dragonflies Hover being released in paperback, I have been featured in the local newspaper where I live.
It's a weird feeling to see yourself in the local newspaper. The title heading is misleading, as they say it's my debut book, but it is only a debut book for this particular publisher, not my first ever book. (I'm currently editing book 16!)
Still, they say there's no such thing as bad press. Hopefully, it'll help Where Dragonflies Hover gain some new readers. 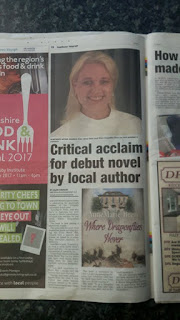 Posted by AnneMarie Brear at 4:39 AM