Life as a British Governess in Russia

Hiring a British governess was quite fashionable among Russian aristocracy during the late nineteenth and early twentieth century. They loved English style and wished their sons to turn into little Lord Fauntleroys. Being able to speak English was considered to be a necessary social accomplishment. French was also fashionable so employing an English governess who could speak the language was ideal. A tutor might also be hired to provide instruction in the Russian and history, and perhaps someone to teach the piano or violin. Lessons would take place in the mornings with the afternoons devoted to teaching drawing, painting and sewing for their daughters. Boys spent the afternoons taking part in field sports and fishing. Very much in the style of British aristocracy.

Books were hard to find. Those brought into the country were often assumed to be politically suspect and not allowed, a situation which worsened once the revolution started. Education was seen by the Bolsheviks as a snare which tended to make people unruly. Families who owned precious books learned to keep them hidden away.

Children were expected to take afternoon tea and dinner with their parents, and the governess must accompany them. This requirement differed very much from the situation in England where a governess was held in something of a limbo between servants and master. Millie was thankful that she’d learned about aristocratic etiquette from her former employer. The children, however, were quite capable of embarrassing her.

Discipline was an important part of a governess’s job. Not always easy with children who had led sheltered, spoiled lives. Some governesses lost patience and made them stand on a table, or put sticky paper over their mouth. Millie did not approve of such punishment.

A governess was also expected to attend church with the family most Sundays. The congregation would stand throughout the long service, even the Tsar and Tsarina, and all servants of the household must wear their best clothes. A fine hat was essential, the more flamboyant the better.

She could also visit the British and American Chapel in St. Petersburg on her day off, which Millie did, once she had convinced the Countess that she was entitled to some free time of her own. After the service the governesses would get together to chat as this wasn’t simply a place of worship, but also a social club. It provided evening classes, a library, chess club, choir, amateur dramatics and jolly picnics. It was the place to make friends, and hear of new jobs on the chapel grape-vine. Very much a home from home for ex-pats. It was here that Millie met the love of her life, but did he feel the same way about her? 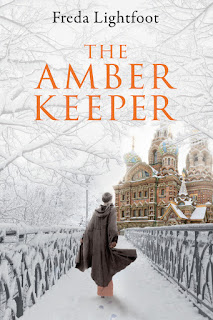 Set against the backdrop of revolutionary Russia, The Amber Keeper is a sweeping tale of jealousy and revenge, reconciliation and forgiveness. English Lake District, 1960s: A young Abbie Myers returns home after learning of her mother’s death. Estranged from her turbulent family for many years, Abbie is heartbroken to hear that they blame her for the tragedy.

Determined to uncover her mother’s past, Abbie approaches her beloved grandmother, Millie, in search of answers. As the old woman recounts her own past, Abbie is transported back to the grandeur of the Russian Empire in 1911 with tales of her grandmother’s life as a governess and the revolution that exploded around her. As Abbie struggles to reconcile with her family, and to support herself and her child, she realizes that those long-ago events created aftershocks that threaten to upset the fragile peace she longs to create.

Published by Lake Union Imprint.
Amazon
Posted by Freda Lightfoot at 7:00 AM