ONCE UPON A TRUE LOVE’S KISS 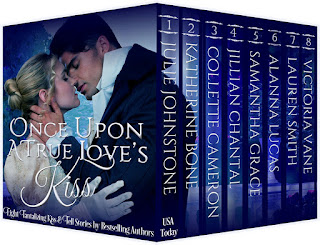 AFTER FOREVER by JULIE JOHNSTONE-
Lady Julia is hired to turn a rogue into a gentleman and receives lessons in love and desire.
Widowed Lady Julianna Barrows never wants to fall in love again. But when the notorious former boxer Nash Overton hires her to transform him into a gentleman, Julianna quickly becomes the student, learning more about passion than she’s ever known, and more importantly, learning how to love again.

THE PIRATE’S DUCHESS by KATHERINE BONE -
A duke masquerading as a pirate to "rob from the rich and give to the poor" sheds his darkest-kept secrets to keep from losing the duchess his wife has become.
Duty forces him to take on the pirate code, but honor brings him back.

Prudence, Duchess of Blackmoor, has one desire—to be happy again. After struggling to overcome the horrifying death of her husband, she accepts an earl’s offer of marriage, confident she’s taking a step in the right direction. But demons, refuse to die, and Prudence finds herself caught in an intricate web of deceit that threatens the very foundations of all she holds dear.

Tobias, the Duke of Blackmoor, crosses the line when an assassination attempt on him fails. To restore the reputations of friends under attack by the same villain, and ensure his wife’s safety, he stages his own death, becoming The Black Regent, a notorious pirate bent on brandishing justice, never thinking he’d survive. But to his amazement, he has, and now the darkest-kept secrets are not worth losing the duchess his wife has become.

HER SCANDALOUS WISH by COLLETTE CAMERON
A marriage offer obligated by duty . . . an acceptance compelled by desperation.

Philomena Pomfrett is resigned to spinsterhood, but to ease her dying brother’s fretting, she reluctantly agrees to attend a London Season with one purpose—to acquire a husband. Stumbling upon her hiding in a secluded garden arbor during a ball, Bradford, Viscount Kingsley doesn’t recognize his first love, yet something about the mysterious woman enthralls him, and he steals a passionate, moonlit kiss.

Caught in the act by Philomena’s brother, Bradford is issued an ultimatum—a duel or marry Philomena. He offers marriage, but even impoverished and with no other decent prospects, she rejects his half-hearted proposal until her brother collapses. Now, Philomena’s faced with marrying a man who deserted her once already.

MILADY AND HER SPY by JILLIAN CHANTAL
A lady, a spy, a traitor… a battle of wills.

Raised in the country after her mother’s death with only the company of three unruly brothers, Lady Augusta Covington is more proficient at fencing, riding and playing cards than being prim and proper. Myles Cuthbert, a spy in His Majesty’s service on a mission to find and expose a traitor, crosses paths with Lady Augusta when she rides to the aid of her brother, believing him to be injured. With the assignment at risk, Cuthbert agrees to accept the assistance of the troublesome lady eager for intrigue. As they move forward, his sense of obligation to her and the danger involved stir his soul.

KISSED BY A SCOTTISH ROGUE by SAMANTHA GRACE
Scottish land steward Fergus McTaggert calls a temporary truce with his employer's companion only to discover their passionate battles have been masking their hidden desires.
His Mother Insists He Needs a Wife.

Fergus McTaggart, Aldmist Fell’s land steward, has no time for wife hunting. Any day his employer's sisters will be arriving at the Scottish castle for a long overdue reunion. Fergus is determined to make their stay memorable, but all anyone is likely to recall are the loud rows between him and his employer’s cheeky paid companion.

She Insists He Needs a Good Knock to the Head.
Edith Gallagher has been charged with watching over her employer’s youngest sister while the family winters in Scotland, but the stubborn land steward interferes at every turn. Eventually, she and the Scot call a truce for the sisters’ sakes only to discover their passionate battles are masking hidden desires.

STOLEN KISSES FROM THE VISCOUNT by ALANNA LUCAS
A rake, an heiress, and stolen kisses...this seduction could be his last.
Desperate times call for drastic measures as Miss Aveline Redgrave enters her third season. Fearful of fortune hunters, she attempts to stay clear of Lord Leybourne, a rogue who is not to be trusted. But his seductive smile and enticing kisses awaken a passion that threatens her common sense. No stranger to scandal, Leybourne is determined to save his family from ruin whatever the cost, even marrying an heiress he doesn’t love. But an unexpected desire and need to protect threatens his plans. Will past heartaches and a devastating wager destroy their future or will true love’s kiss triumph?

TEMPTED BY A ROGUE  by LAUREN SMITH
Gemma never planned on falling in love with her childhood sweetheart’s best friend, Jasper, when he returns home, but she can’t resist the naval officer’s brooding charm.

Gemma plans to marry James, her childhood sweetheart. With every letter written between them while he's been off at sea, their love has grown. Now they will be reunited with his return to England. But the man whose words she'd fallen in love with isn’t James...

Jasper, a gentleman rogue of the first order, is trapped. Talked into a scheme by his friend, he pretended to be James for eleven years while writing to Gemma. He’s promised James he’d break it off. But when he returns home, his secret will come out – and he’ll lose the one woman he can’t live without.

THE REDEMPTION OF JULIAN PRICE by VICTORIA VANE
She gave him a chance to bury his past… but the price would be his heart…
Burdened by the past…Orphaned at a young age and left to run wild, at eighteen Julian Price joins the fight against Napoleon in the hope of attaining honor. Devastated when his best friend, Thomas, is killed in battle, Julian returns home burdened with guilt, only to find his wastrel uncle has squandered his inheritance.
Desperate to live her own life… Facing a future of drudgery caring for her aging mother and raising her brother’s children, Henrietta Houghton believes her chance at a real life died with Thomas, the only man who ever wanted her. But Henrietta is still full of dreams. When her wealthy aunt, offers her a gift of ten thousand pounds, Henrietta finally has the chance to choose her own destiny.
Everything has a price...With a fortune at her command, Henrietta offers Julian a marriage of convenience, unaware that she really offers Julian a means of salvation—not just his fortune, but his very soul.

JULIE JOHNSTON - is an USA TODAY best-selling author of edgy Regency Romance. She feels she’s living the dream by working with her passion of creating worlds from her imagination. When not writing, she’s chasing her precocious children around, cooking, reading or exercising. Julie loves to hear from her readers. To connect with Julie or learn more about her books, visit: www.juliejohnstoneauthor.com, www.facebook.com/authorjuliejohnstone, or www.twitter.com/juliejohnstone

KATHERINE BONE - is an Amazon #1 best-selling Historical Romance Author passionate about history since she had the opportunity to travel to various Army bases, castles, battlegrounds, and cathedrals as an Army brat-turned-Officer's-Wife. Now she lives in the south where she writes about Rogues, Rebels and Rakes, aka Pirates, Lords, Captains, Duty, Honor, and Country and the happily-ever-afters every alpha male and damsel deserve. To connect with Katherine or learn more about her books, visit www.katherinebone.com, www.twitter.com/katherinelbone, or
www.facebook.com/#!/pages/Katherine-Bones-Official-Fan-Page/134578253291785,

JILLIAN CHANTAL – is a 2015 RONE Finalist and lives on the beautiful coast of Florida, and even though she loves her little slice of paradise, she’s an Anglophile at heart. Writing in a variety of romance genres makes her happy, but she has a particular fondness for the Georgian/Regency era as it was the age she adored as a teen and as her introduction to the world of happily-ever-afters. Living on the gulf coast also reminds Jillian, daily, that even though she loves the past, she needs the present. Air conditioning is vital for her survival. To connect with Jillian or learn more about her books, visit: www.facebook.com/jillian.chantal, www.twitter.com/JillianChantal, www.JillianChantal.com,

COLLETTE CAMERON – is an Amazon #1 best-selling and award-winning Historical Romance Author of more than ten Scottish and Regency Romances featuring rogues, rapscallions, rakes, and the intrepid damsels who reform them. Mother to three and self-proclaimed Cadbury chocoholic, she makes her home in Oregon with her husband and five mini-dachshunds. You'll always find animals, quirky—sometimes naughty—humor, and a dash of inspiration in her novels. To connect with Collette or learn more about her books, visit: www.collettecameron.com www.facebook.com/collettecameronauthor,  www.twitter.com/Collette_Author

SAMANTHA GRACE - is an Amazon best-Selling, RITA-nominated Historical Romance Author who discovered the appeal of a great love story at the age of four, thanks to Disney’s “Robin Hood”. She didn’t care that Robin Hood and Maid Marian were cartoon animals. It was her first happily-ever-after experience, and she wanted the warm fuzzies to go on forever. Now that Samantha is grown, she enjoys creating happy-endings for characters that spring from her imagination. Publisher’s Weekly describes her stories as “fresh and romantic” with subtle humor and charm. Samantha describes romance writing as the best job ever. To connect with Samantha or learn more about her books, visit: www.samanthagraceauthor.com, www.facebook.com/pages/SamanthaGrace/264436686918343?ref=bookmarks,  www.twitter.com/SamGraceAuthor

ALANNA LUCAS – is an Amazon best-selling author and grew up in Southern California, but always dreamed of distant lands and bygone eras. From an early age she took interest in art, history, and travel, and enjoys incorporating those diversions into her writing. However, she believes that true love is the greatest source of inspiration and is always an adventure. Alanna makes her home in California where she spends her time writing historical romances, dreaming of her next travel destination, spending time with family, and staying up too late indulging in her favorite past time, reading. To connect with Alanna or learn more about her books, visit: www.alannalucas.com, www.facebook.com/alannalucas27,  www.witter.com/alannalucas27

LAUREN SMITH- an attorney by day, is an Amazon best-selling, award winning author by night, who pens adventurous and edgy romance stories by the light of her smart phone flashlight app. She’s a native Oklahoman who lives with her three pets: a feisty chinchilla, sophisticated cat, and dapper little schnauzer. She’s won multiple awards in several romance subgenres including being a New England Reader’s Choice Winner, Greater Detroit Bookseller’s Best Award Finalist and a Semi-Finalist for the Mary Wollstonecraft Shelley Award. To connect with Lauren or learn more about her books, visit: www.laurensmithbooks.com, www.facebook.com/LaurenDianaSmith/, www.twitter.com/LSmithAuthor

Once Upon a True Love’s Kiss buy links/links

Posted by AnneMarie Brear at 12:30 AM

Thanks for hosting us! Happy New Year!

Thanks for having us today. Great blog you have!

Thank for hosting us!

Thanks for sharing our box set, Belles & Beaus! We appreciate you!!!

Thanks for helping us celebrate our new release!