Excerpts from The Folly at Falconbridge Hall,and What the Butler Winked At. 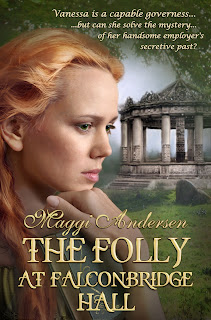 Review: The author deserves high praise for her ability to capture the reader's attention and engage one in both the mystery and the romance of this delightful story!

Approaching the 20th Century, life was changing for British aristocrats. It was becoming increasingly difficult to afford to run a huge house full of servants.  When Vanessa Ashley arrives at Falconbridge Hall, there is no butler or footmen to greet her.

This excerpt comes from WHAT THE BUTLER WINKED AT, Being the Life and Adventures of Eric Horne, Butler by Eric Horne. It set after the Great War, but highlights the changing landscape of the late Victorian and early 20th Century aristocracy. Shades of Downton Abbey here.
"Now that Old England is cracking up, as far as the Nobility is concerned, who are selling their estates, castles, and large houses, which are being turned into schools, museums, hospitals, homes for weak-minded-things entirely different from that they were built for-it seems a pity that the old usages and traditions of gentleman's service should die with the old places, where so many high jinks and junketings have been carried on in the old days, now gone for ever. The newly rich, who filled their pockets while Tommy was fighting-many of them have bought these fine old estates-are a poor substitute for the real thing...They may spend their money in giving fetes, parties, balls, and use every device to get into Society, or what is left of it, but all their doings will only be a sham, a poor substitute. You cannot make a silk purse out of a sourced mackerel, neither will they command the same respect; it is simply so much work for so much money, and there the matter ends. "

Here's a taste of THE FOLLY AT FALCONBRIDGE HALL


Vanessa Ashley planned to arrive at her destination cool and composed, but she felt like a wilting lily. She dabbed her handkerchief at the sweat trickling into her collar as heat gathered beneath her chip-straw bonnet. Clapham High Street Railway Station was a noisy and smelly hub of activity, luckily the residence that was to be her new home lay in the countryside.


A short, bearded man approached her and politely touched his hat. “For Falconbridge Hall, miss?”


“They just call me Capstick, Miss Ashley. This way.” He led her to a trap. After he’d loaded her trunk and her bicycle on board, they seated themselves. He slapped the reins and told the horse to walk on. “You’re the new governess?”


“Another one,” he muttered and shook his head.


Startled, Vanessa stared at him. “How many have there been?”


Capstick declined to comment. He just grunted and shook his head.


“Well, I intend to.” Vanessa straightened her shoulders. It was true she had never wished to be a governess. Even though she was still quite young, her wish for children of her own now seemed unlikely, and if this was to be her fate, she intended to make the best of it. A person without funds, indifferent looks, and a lack of grace had no other course open to them.


“Good luck to yer, then.” Capstick grinned at her, revealing a large gap in his front teeth.


With reassuring skill, he negotiated around a horse-drawn tram as they passed the bandstand on the common and then drove down tree-lined avenues. Villas were soon replaced by streets of gracious homes set amid beautiful gardens. A sign, reading Clapham Park Estate, appeared, followed by larger country houses on acreages.


They passed the last of the houses and were out in the countryside now. Green fields crisscrossed by hedgerows stretched away to a line of forest in the distance. The trap followed the road beside a high brick wall for about a mile until they came to a pair of impressive wrought iron gates with Falconbridge Hall emblazoned on them in gold lettering. Capstick drove through, and a house appeared above the trees. Many chimneys rose from the massive slate roof.


Ahead of them, a stocky dark-haired man rode a magnificent bay horse across the lawn and vaulted a hedge. Vanessa had a glimpse of dark, gypsy eyes and a white smile beneath a black moustache. Before they drew level, he turned the animal and rode towards the woods.


“Who was that?” she couldn’t help asking, watching him disappear into the trees.


“That’s the groom, Lovel, exercising the master’s horse.” Capstick shook his head. “The gardeners will not be pleased.”


The gravel drive bordered by lime trees curved around through formal gardens to the front of the house where he left her, disappearing with her trunk and bicycle toward the rear entrance and, she presumed, the coach house and stables.


The sprawling red brick house had sandstone trim around the windows and a tower at one end, ivy covered its walls. It was older and far bigger than those they’d passed on their way from the station. The house had settled into its surroundings, and she had the feeling it had been here for a very long time while the urban sprawl of Clapham edged ever closer.


Conscious that she looked rumpled and untidy, Vanessa smoothed the skirt of her olive green linen dress and straightened the limp white collar with travel-stained cotton gloves. She picked up her bag and stepped up to the paneled door flanked by stout white columns.
Before she could knock, a maid wearing a mobcap and a white apron over her grey floral dress opened the door. “Miss Ashley? Please come in.”


Surprised not to be met by a butler in such an establishment, Vanessa stepped into the wide entrance hall. One of those new inventions, the telephone sat on a table. A fine Persian carpet ran the length of the parquet floor, pale green satin papered the walls, and fringed and tasseled emerald velvet drapes hung from the windows. Potted ferns clustered in corners, and a gracious staircase led upward. Despite fractured light filtering down from a stained-glass window above the stair, the house was so gloomy inside dusk might have fallen.
“The master’s in his study, miss. Please wait here while I announce you."
Vanessa sank gratefully onto the edge of a straight-backed chair. It had been hours since she’d had a drink, and her mouth was horribly parched. Now her knees had developed a worrying tendency to tremble. To distract herself, she studied the remarkable flesh tones on the naked woman’s torso of the oil painting hanging on the opposite wall. A François Boucher if she was not mistaken. More flesh than was decent, surely.
Her father had preferred the sea and boats as his subjects. He considered the naked body to be soft pornography and not fine art but altered his opinion after nudes became an important asset to any wealthy man’s collection and began to fetch high prices. More than once, Vanessa had come across nude models posing in his studio, barely covered by drapery and, sometimes, wearing nothing at all.