Influences: In the 19th Century, gentlemen cast aside the brightly colored silks and satins of the 18th Century. Regency men’s clothing adopted a monochromatic color scheme, the war having isolated Britain from the extravagances of French fashion. Influenced by George Brummell, who based his dress on the finest of British tailoring and the military, a more masculine aesthetic developed, inspired by English horsemanship and a classical standard of masculinity as seen in the ancient Greek and Roman statuary.
Men were encouraged to improve their bodies and sought active pursuits such as riding, steeplechases, boxing in saloons such as Gentleman Jackson's, or Fencing schools in London.

We begin with said gentleman stripped: 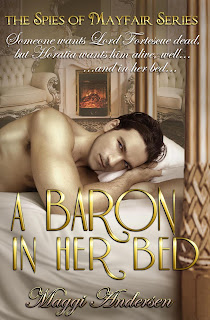 Unlike the 18th Century, where perfume was used to cover body odor, a Regency gentleman would begin his day bathing in hot water. He would forgo any use of perfume, preferring the smell of fresh linen.

Gentlemen seldom wore drawers. Some just tucked their shirttails into their pantaloons, others, for decorum, employed a lining within their unmentionables.

These were laced closed in the back, the front fastened with two buttons and a fly front. There was plenty of material in the seat for ease of movement, the legs tight and tied at the knees. 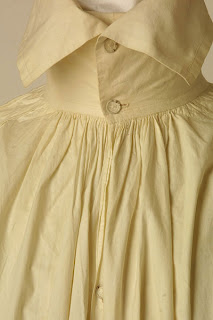 The shirt was of lightly starched white linen , with a generous cut in both the body and sleeves. It had to be pulled on over the head, for the neck opening reached from the collar to about mid-chest with a button at the throat. The wide, long cuffs (longer than the coat) featured a tiny button.

The stockings were of wool or cotton, even under silk for eveningwear, to obtain a smooth appearance.

The waistcoat buttoned up the front. They could be single or double-breasted (like coats) tied at the back with buckles and straps.  Often white or skin-toned to give the impression of a toned chest, in keeping with the neo-classical ideal of a Greek statue.
Detail was all in the front panels, which might be embroidered silk or linen. 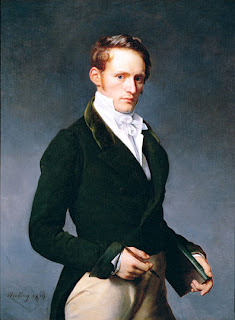 Coats were made from dark matte fabrics such as wool, Bath cloth or superfine, purchased from specialist tailors like John Weston’s at No. 34 Old Bond Street or Schweitzer & Davidson on Cork Street, (Brummell’s favorite). They were designed to embrace the back and shoulders, with a high collar to enhance the crisp cravat. They could be broadened in the shoulders – for those who needed it. Pockets were inside. Dress coats or tailcoats had cutaway fronts with tails in the back. They were single or double-breasted with self-fabric buttons. Brass/gold buttons featured on blue coats.

Unmentionables. Breeches or pantaloons were worn during the day, made of either doeskin or chamois leather, or a soft stocking-like fabric. In summer, they were made of white linen, stout pale, or nankeen. All had corset lacing at the back, with a fall front, the waistband buttoned to the side with 2 or 3 buttons. Belts were never used. Suspenders or crossed braces produced the necessary fitted line over the thigh. Regency men dressed to one side, the pants cut wider on one side at the top of the thigh, and higher on the other. Button fastenings beneath the knee, assured a smooth look to the leg.
Evening Wear. Breeches or pantaloons were made of black silk jersey, knitted cashmere, or silk-stockinette imported from India. The seam on the outside of the leg might be embroidered or clocked to frame the muscles of the thigh. 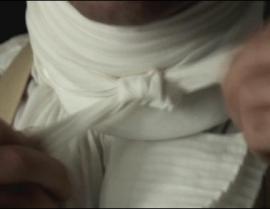 Cravats were often a complex arrangement made from long rectangles of mostly white material – Brummel’s were of fine Irish muslin. A triangle cut on the diagonal from a square yard of fabric, was folded twice, and wrapped about the neck, with the ends

tied in one of several styles. It was then pressed or rubbed into place by a day-old shirt or a hot iron. Starched cravats were padded with horsehair. Brummell often went through piles of material when attempting perfection while dressing!


The working classes adopted colored cravats, as did the sporting set. Such as the “Belcher” neckcloth, (named after the famous pugilist Jem Belcher, which were also called peacock eyed.)

Next, the boots (of varying length) worn not only for riding and hunting, etc, but also adopted for informal morning wear.  There was the top boot, or English, John Bull, Jockey, or Tall Boot. Hessians, or Hess boot, sometimes called the Austrian. Highly polished of course, with spurs by day. Thinly-soled black pumps were worn for evening. 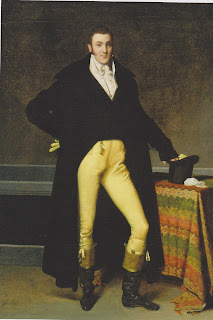 Lastly the coat: A gentleman would have several caped greatcoats or driving coats made of heavier wool for inclement weather. This gentleman wears Hessian boots. 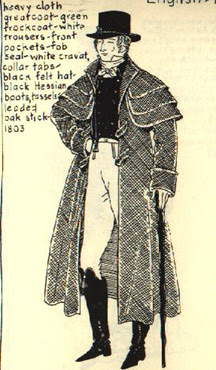 To complete the picture:

A cane, which came in a variety of styles, some, like the Venus were quite lavish and suggestive. 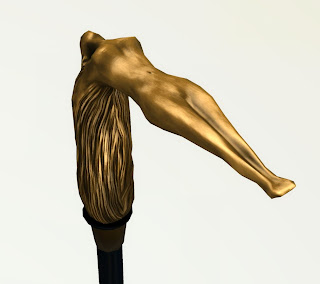 Gloves were yellow/buff or brown leather.
Hats were made from beaver – which almost made the animal extinct.

Really interesting detail in this post - and the photos are so helpful as well. Wherever did you discover that Venus cane?

Thanks Eliza and Beth for dropping by. Glad you enjoyed the post. Beth, I can't remember where I found the Venus cane. I've had it for ages. It's doing the rounds on Printerest now.

Excellent article, Maggi. Very interesting. Thanks for posting it.

Maggi, very interesting. I learned a lot and you made easy to and fun to understand. I've always had trouble dressing my men. I have to take careful notes and reread them to help me get through my confusion.

Glad you found it useful, Steph. Thanks for the comment.