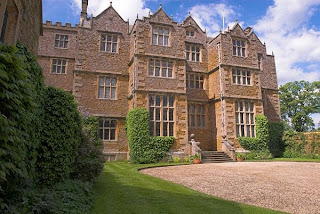 I wanted to spread the word about this little known Jacobean gem I discovered near Moreton-in-the-Marsh. There is no café but the atmosphere is very much like having stepped back in time and the house is 'conserved' rather than preserved..

Chastleton House was completed in 1612, with typically Elizabethan and Jacobean gardens which have a ring of fascinating topiary at their heart. The house belongs to the National Trust, but to preserve the fabric of the building and its furnishings, admission is by timed ticket and advance booking is recommended. The maximum number of visitors admitted per day is 175.

The house was once owned by Robert Catesby, one of the Gunpowder Plot instigators. Catesby mortgaged the property to Walter Jones, and when Catesby fell on hard times and was unable to keep up payments, Jones took over the property, pulled down Catesby's house and built a new, grand mansion, which is the Chastleton House that exists today.

Anne Fettiplace , daughter of Sir Edmund  Fettiplace and Ann Alford, married Henry Jones in 1609 and lived at Chastleton House. As the house was still under construction at the time of the wedding, the Fettiplace Coat of Arms were incorporated in the overmantle.

Little altered from its original design, the approach to the house is by way of a winding path down a moderate hill, with views to an attractive dovecote of similar age to the house. Which is a nice way of saying the car park is miles away! The 12th century parish church is next door and a small entry gateway gives onto an outer courtyard, with stables to the left and the house itself to the right. Visitors are shown through some beautiful, and authentically furnished and restored Jacobean and Tudor rooms.

Here, the floors bend and buckle with the wrinkles of aged timber, and the bedrooms are authentically furnished with period pieces. The long gallery on the upper floor occupies the entire length of the house. With a barrel vaulted roof, and superbly executed plasterwork ceiling the room is magnificent. Unfortunately there is also evidence of death watch beetle that has occupied the house for several centuries! 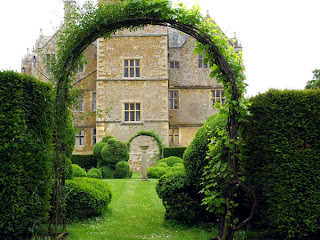 I especially liked the butler's chamber on upper floor gives an excellent view of the roof beams and the skeleton of the house frame. The kitchens were in use until the 1950s, where the blackened grime of centuries remains on the ceiling.  Legend says a former resident declared it was bad luck to clean kitchen ceilings, so it was never touched!

A large section of gardens behind the house form two large croquet lawns – it was here at Chastleton in 1865 that the rules of lawn croquet were first codified.
Posted by Anita Davison at 11:27 AM

We all dream of such a house, don't we? Not now for me, perhaps, think of the upkeep.

I don't think I'd be cleaning the ceiling either - too many other interesting things to look at.

Fascinating place! Apparently the family lost their money in the English Civil War.

Did you see the panoramic, interactive view of the Long Gallery was published on the Guardian recently?: http://www.guardian.co.uk/artanddesign/interactive/2012/feb/05/chastleton-house-panoramic