Macaroni! And I Don't Mean Pasta

Every era has its extremes of dress. The Sixties had micro-minis. The Roaring Twenties had flapper dresses. Georgian England had macaronis.

Although today most fashion is geared toward women, the macaronis were men. "Macaroni" or "maccaroni", from the Italian word, maccherone, which literally means a boorish fool, described the height, and often the extremes, of male fashion in the mid 1700's.

Brought from the continent by idle young men on their Grand Tour, macaroni dress took the standard male wardrobe of wig, coat, waistcoat, breeches, stockings and shoes to absurd lengths. The express purpose was to shock people. And shock they did. Coats were tight. Huge buttons decorated short waistcoats. Narrow, dainty shoes sported buckles almost larger than they were. And copious amounts of lace, ribbon, ruffles and whatever other outrageous decoration took the wearer's fancy trimmed the outfits, with everything in gaudy colors and showy fabrics like silks and satins.

Perhaps the most obvious feature of macaroni fashion was the wig. As in these pictures, macaroni wigs were excessively elaborate and tall, and, by contrast, crowned with a tiny hat that literally could be removed only with the point of a sword. 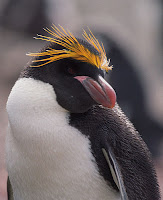 Macaroni clothing was never mainstream. While the fashion provided a wealth of fodder for caricatures, most people laughed it off as the blatant posturing of immature males.

The word remains in the vocabulary, although today its definition has constricted to pasta. But several vestiges of its original meaning linger to confound us.

The Macaroni Penguin, a large crested penguin native to Antarctica and the southern tip of South America, owes its name to the Georgian macaronis. English mariners in the Falkland Islands, off the coast of Chile, named the bird. With its flamboyant, colored head feathers, the penguin reminded the sailors of the macaronis back home.

And Yankee Doodle "stuck a feather in his hat and called it macaroni".

Next time, Yankee Doodle and macaronis.

Thank you all,
Linda
Welcome to My World of Historical Hilarity!
http://www.lindabanche.com
Posted by Linda Banche at 10:01 AM

Wow Linda, the pictures are extreme!Pasta will never be the same again!

Wow Linda, the pictures are extreme!Pasta will never be the same again!

LOL, right you are, Deborah!