Christina is half English/half Swedish, but grew up mostly in Sweden. She is married with two grown-up daughters and currently she divides her time between London and Herefordshire.
She is also a committee member of the Romantic Novelists' Association, responsible for the Love Story of the Year Award.
For more information, please visit http://www.christinacourtenay.com/


Cristina has kindly posted a blog about her new book, Trade Winds, which also carries on the theme of our previous blog post by Freda Lightfoot about the staus of women in different eras.

Status of Women in 18th century Sweden by Christina Courtenay.

I was reading your recent blog posts and noticed that quite a few were about the status of women through the ages and the fact they had hardly any rights in the eyes of the law unless they were widows. This seemed very apt, since the heroine in my novel Trade Winds, Jessamijn van Sandt, is in exactly that situation. Being an only child, her father had trained her to take over the running of his merchant business and therefore educated her beyond what was normal for a girl in 18th century Sweden. However, when he dies, Jess finds that her mother has inherited everything and when the mother remarries, the company goes to her new husband, Jess’ father’s former business partner. She smells a rat, but there is absolutely nothing she can do about the situation unless she can prove the will false or that her step-father has cheated her.

When researching this novel, I too was intrigued to find just how little power a woman had over her life. I tried to come up with ways that Jess could redress the situation, but short of finding written proof that the business should have gone to her, she was powerless. She obviously needed help from a man, but her step-father thwarts her efforts to find a husband by scaring away any suitors, telling them she has no dowry even though she does. Her only recourse is to marry someone in secret, but even that could backfire, as I found out. If a girl married without consent from her parent or guardian, the marriage was legal, but the parent/guardian had the right to withhold her dowry and cut all ties with her. 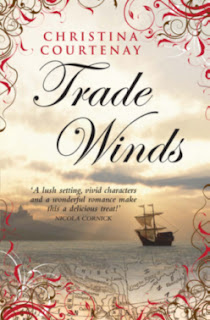 Luckily for Jess, her new husband is resourceful, and all ends well, but in real life the scenario could have been very different. Although I’ve always loved history and often wish I lived in the past, the thought of being so helpless makes me feel grateful for our modern laws. We have a lot to thank the suffragettes for, that’s for sure!

Trade Winds is the story of handsome Scotsman Killian Kinross, who goes to Sweden in the hope of making his fortune. There he meets strong-willed Jess van Sandt, a merchant’s daughter who believes she’s being swindled out of her inheritance by her step-father. They join forces for mutual benefit and enter into a marriage of convenience, but then Killian is offered the chance of a lifetime with the Swedish East India Company. He sets sail for China, but the journey doesn’t turn out quite as he expected ...

Thank you for visiting the Historical Belles & Beaus Blog, Christina.
Posted by AnneMarie Brear at 8:00 AM

Jess is a wonderful heroine; a strong, independent woman who finds her match and her equal in Killian. The story of their quests and how they join forces makes for a thorougly enjoyable read.

Thanks, Chris! And thank you Belles and Beaus for having me as your guest!

Thank you, Maggi! I hope you enjoy it if you do.

I have read Trade Winds and throughly enjoyed both the story and the reasearch behind it. The plot is exciting and pacey and the characters are well drawn - whether good or bad people.